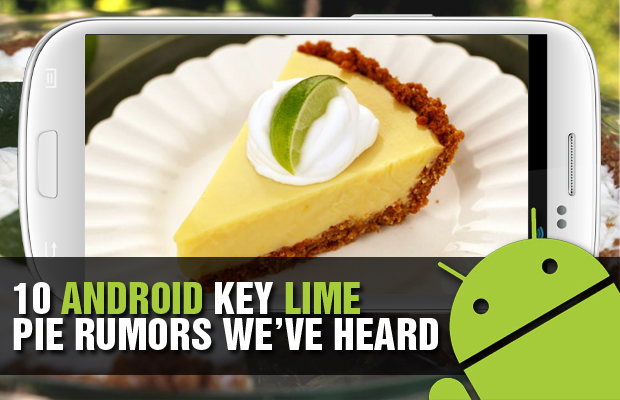 The hype around Google’s new operating system continues to grow, to the point where all expectations have already become insurmountable. But then again, what new Google product hasn’t reached that belief level of absurdity? Exactly. In true fashion, the search engine (and now mobile) giant is already prepping to launch its new ridiculously titled OS, codenamed Key Lime Pie, and just within that 8 months to one year time span after releasing its last one: Jelly Bean. The promise of new features and performance enhancements are a given. However, it’s still undetermined as to how advanced the user experience will become for mobilephiles.

In light of the recent leaked slides from a Qualcomm presentation, word has KLP dropping sometime this spring, possibly around Google’s annually scheduled I/O event (May 15 – 17). With the premature announcement date comes more hearsay linked to the upcoming OS. So what’s being thrown around across the Web? Indulge as we give you a taste of the 10 Android Key Lime Pie Rumors We’ve Heard (So Far).

Related: 10 Reasons Why BlackBerry 10 Might Actually Be Good
Related: The 10 Best Smartphones $300 and Under