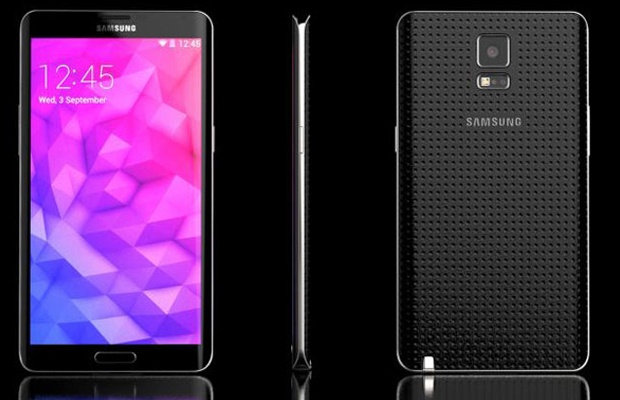 Androidphiles know all to well Samsung is working on its next-gen phablet, though it remained a mystery when the Galaxy Note 4 would launch and what its spec sheet would look like. The mobile giant has gone on record confirming its upcoming flagship handset will go on to sport a 5.7-inch QHD (2560×1440) display, which will make the screen incredibly sharper than its predecessor.

As the IFA event is scheduled for the fall, analysts expect the Galaxy Note 4 to be the scene-stealer, with a release a follow shortly after. Industry insiders are also claiming that two versions of the device will be launched—a curved screen version in select markets and a flat screen model for mass markets—along with these additional specs:

– Enhanced S-Pen to use handwriting to unlock phone, and even write a name to call a contact.
– Qualcomm Snapdragon 805 processor.
– Could support 4K resolution.
– Dust-proof and water-resistant.
– A patent displayed the curved version with buttons running along the side to reduce storage on the screen.
– Curved screen is most likely
– 64-bit chip could be on integrated.
– RAM expected to increase to 4GB.
– 20MP sensor is being considered with a 2MP front-facing camera

That’s a pretty hardcore spec sheet right there, believable at that. The Galaxy Note 4 is expected to be announced at the end of August, with a September release to follow suit. Availability and pricing remains unknown.