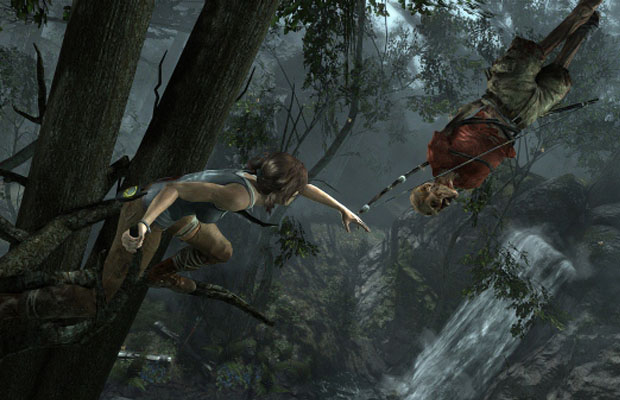 The combat system featured in the previous titles has never been great, but Crystal Dynamics nailed it this time around. Tomb Raider’s filled with many intense battles, especially heading into the third act, plus the melee action has been handled with more precision here, therefore making it much more fun to engage in. Sneak attacks are executed beautifully, along with the foraging and hunting aspects of the game.

But the most defining attribute here has to be climbing, as the developer found a way to make this feature much more thrilling thanks to amazingly detailed environments. You’ll see what we’re talking about when shooting Lara across a cliff with climbing axe in-hand, as the character displays her depth of athleticism with finesse.

The game offers three upgrade skill sets: Survivor, Hunting, and Brawler. You MUST upgrade each skill, as each is vital to advancing towards the conclusion. How does one build up these skills? Experience points can be gained with the kills of all animals (deer, wolves, and even rabbits), unlocking a new Hunting skill called Survivor Instinct, which when activated helps gamers solve puzzles by setting necessary items to glow. Now that you’re leveling up, put those points to good use by applying them to Lara’s survival skills. This helps in two ways as it improves Survival Instinct and allows you to earn bigger XP and rewards from kills.

Weapons also need upgrades and require a certain amount of “salvage” to be spent upon doing so. Where can you find this? One option is by collecting small crates that are hidden throughout the area. Another is using the torch to burn down nets to release crates. In addition to salvage, you may find weapon parts for a current weapon. Gather enough parts (two for the Recurve Bow, three for others), the weapon will be upgraded to a more advanced model, plus other upgrades will be unlocked.