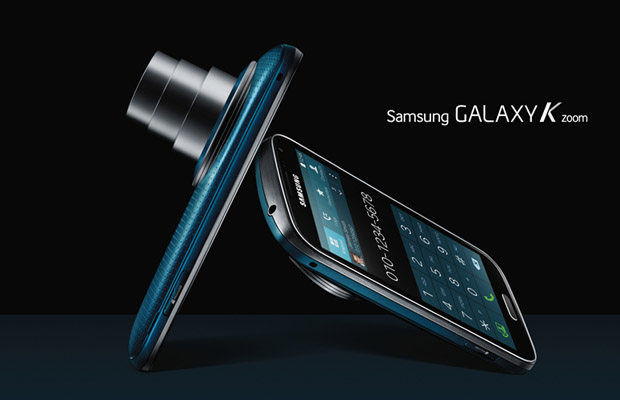 A day after rumors of Samsung re-releasing the Galaxy S5 with a 2K display surface, the mobile giant announced the latest member of the Galaxy family. Introducing the Galaxy K Zoom—an Android powerhouse boasting a retractable 20.7MP camera with 1/2.3 BSI CMOS sensor and 10X optical zoom.

The shooter features optical image stabilization, Xenon flash, AF/AE Separation, Pro Suggest mode that offers 5 optimized filter settings, and a Selfie Alarm for timed selfies. Samsung also claims the camera will have an more user-friendly interface than the previous Galaxy models, though it’s being said it could be a redesigned version of the one found on the GS5.

Design-wise, the handset carries over the dimpled rear as the Galaxy S5, which should provide enhanced control grip, while plastering a 4.8-inch 720p Super AMOLED display on the front. Most other GS5 features will be ported over as well: including the Ultra Power Saving Mode, Kids Mode, Android 4.4 KitKat, and Studio app. Hardware consists of a hexa-core Exynos 5 Hexa (5260) processor with two 1.7GHz Cortex-A15 cores and four Cortex-A7 cores, 2GB of RAM, 2.1MP front camera, 8GB of memory, microSD card slot, and 2,430 mAh battery.

The Galazy K zoom will be made available in three colors—Charcoal Black, Electric Blue, and Shimmery White—and launched sometime next month. No carrier or pricing options have been released as of yet.