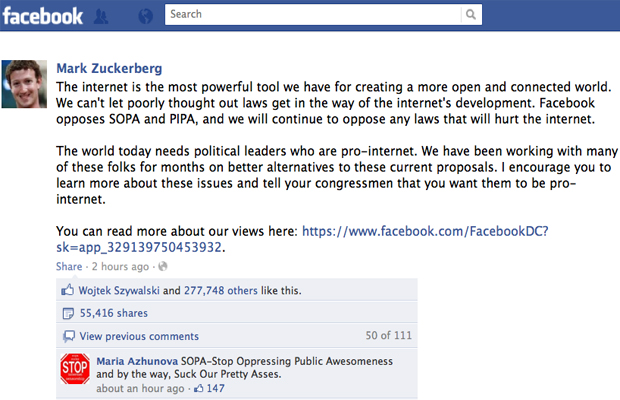 While several major websites and media outlets have protested against the Stop Online Piracy Act by engaging in blackouts, Facebook has taken a difference stance on the controversial law. Mark Zuckerberg has been extremely quiet on the subject matter, until today, when the CEO took to his Facebook account and spoke out against the legislation. Here’s what he shared on his FB account:

“The internet is the most powerful tool we have for creating a more open and connected world. We can’t let poorly thought out laws get in the way of the internet’s development. Facebook opposes SOPA and PIPA, and we will continue to oppose any laws that will hurt the internet.

The world today needs political leaders who are pro-internet. We have been working with many of these folks for months on better alternatives to these current proposals. I encourage you to learn more about these issues and tell your congressmen that you want them to be pro-internet.”

Adding to his remarks, Zuckerberg also informs readers where they can read additional details on the company’s stance and how readers can become involved by directing them to the Washington DC Anti-Piracy Bills Facebook page. This concerns all of us, people. Get involved.