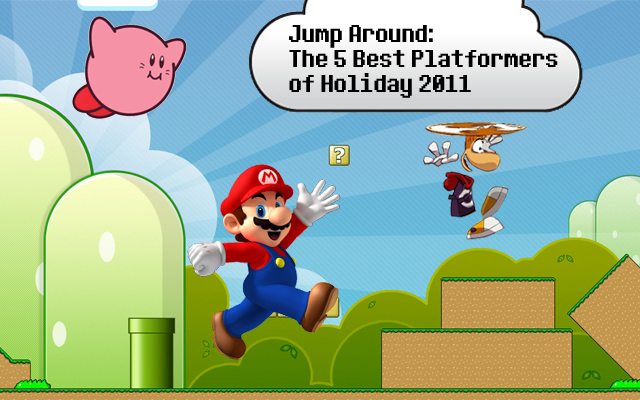 During a time where games like Batman: Arkham City, Modern Warfare 3, and Elders Scrolls V: Skyrim are all set to dominate your next-gen consoles, we tend to neglect the “little guy.” By that we mean the platformer. Sure, titles like Super Mario have stood the test of time and always dominate the holiday sales charts, but it’s the big boys like Uncharted 3 and the Call of Duty series that gamers consume most of their time with these days. But lets not forget our gaming roots because retrospectively, the odd genre out has birthed some of the most entertaining and challenging games of our time. So once you’re done completing the eight-hour single player campaigns of your favorite shooters, or lose interest in the never-ending RPG, relive the glory days of simplistic gameplay, difficult puzzles, and vibrant animations by picking up one of these holiday platform titles. Dun Dun Dun DunDun Dun Dun!

Expected: 10/24
The first traditional Kirby platform title since the N64’s Kirby 64: The Crystal Sands brings back the staple gameplay of the original games and features a drop-in co-op mode system that welcomes up to four playable characters onscreen at any time. Not only will gamers be able to control four different Kirbys, they can choose from Meta Knight, King Dedede, or Waddle Dee, as they assist the pink puffster in his attempt to help an alien named Magolor find the missing pieces of his wrecked ship and restore peace to Dreamland. Aside from Legend of Zelda: Skyward Sword, Nintendo gives you a second reason to keep your Wii active during its final run.

Expected: 11/1
Wait a sec? A Sonic game that lets you play as both modern and classic Sonic? Plus revisit classic levels from the Genesis and Dreamcast era? Sold. Sega commemorates the blue hedgehog’s 20th Anniversary with this old school meets next-gen crossover dubbed Sonic Generations. Each character variation plays out as it did in its original games, with Classic Sonic limited to the super dash and Modern Sonic having the capability to target and attack enemies in mid-air. Levels span all the way from the popular Green Hill Zone (Sonic the Hedgehog) to Planet Wisp (Sonic Colors), and all the 16-bit soundtracks have been remixed with an updated sound. Oh yea, the 3DS version is also said to feature the infamous Casino Level from Sonic 2. Sonic is back in rare form.

Expected: 11/13
The Big N introduces the first portable 3D Mario game on the 3DS and looks to combine the traditional side-scrolling action of earlier titles with the in-depth environments of the most recent entries. New Super Mario Bros, Super Mario Sunshine…you get the picture. Classic power-ups such as the Fire Flower, Starman, and Super Leaf are still intact, along with a few new suits like the Boomerang Flower, which allows the plumber to hurl (what else) boomerangs at Goombas. Once again, Miyamoto leaves his imprint on this generation’s gaming audience.

Expected: 11/15
Finally! Ubisoft ditches the rabbids and resurrects the fan-favorite 2D sprite known as Rayman. The limbless wonder’s new adventure serves as a prequel to the side-scrolling franchise that features single player and multiplayer modes, with four-player co-op accessible throughout the entire game. Take Rayman, Globox, and two teensies across 60 plus levels as they save the Glade of Dreams from Darktoons and other mischievous creatures. Origins is the first game to utilize Ubisoft’s UbiArt Framework—allowing developers the opportunity to combine beautifully hand-drawn graphics with unique gameplay elements. It’s about time the franchise received its due.

Expected: 11/15
Sega’s hack and slash, action side-scroller gets the 3DS treatment, while staying true to form with its intense combat scenarios by and over-the-top boss battles. Play as the father of the original Shinobi , Jiro Mushashi, and master an all-new combat system that combines ranged, acrobatic, and melee attacks together, alongside the use of ninja magic. Unlock the original bonus levels and other playable characters (Joe Mushashi). We’ll let the hands-on demo convince you.