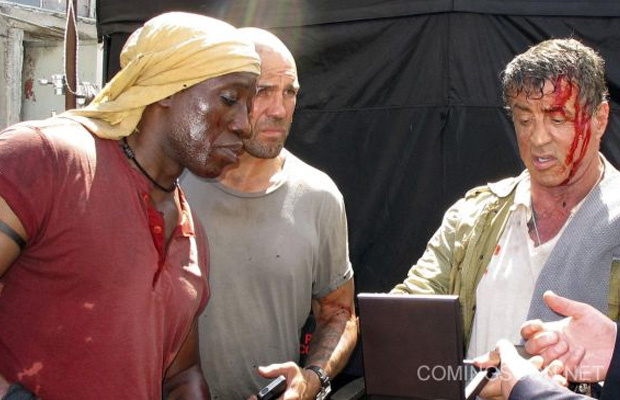 Several entertainment outlets scored access to The Expendables 3 set, but none proved to be more enticing than Collider’s sit down with franchise star Sylvester Stallone. The action hero icon went on to reveal the opening scene of the film, which features the gang rescuing Wesley Snipes’ character from a “heavily-fortified, armor-plated train via helicopter.” It’s said that Snipes will play Doc, a former medic and knife expert who has a rivalry with Jason Statham.

Stallone breaks down the action, while also discussing baddie Mel Gibson’s on-screen debut in the franchise:

“The opening scene is the extraction of Wesley from the most heavily-fortified, armor-plated train via helicopter, and it’s real. So you’re going to see something that’s not CGI and is pretty extraordinary. So that’s just your opening, and we go from there to Somalia and it’s epic, it’s huge. That’s where Mel Gibson makes his entrance. Right now we’re doing, with Dan Bradley who is considered the greatest action coordinator and second unit director in the world—I thought I was watching another movie, I was like, is this an outtake from Bourne? [laughs] it’s looking so good. So it’s really hard to pinpoint it. There are going to be some interesting one-on-one fights. Jason’s going to be fighting a monster, Ronda’s going to be fighting a monster. I just shoot guys, it’s easier. We developed that early into the character. But Mel and I are going to have a real one-on-one fight, that’s going to be pretty violent and interesting. When I went into this business and did Rocky, I thought “I wonder if I’ll ever be fighting that guy from Braveheart?” It’s funny how all these roads end up here. It’s wild.”