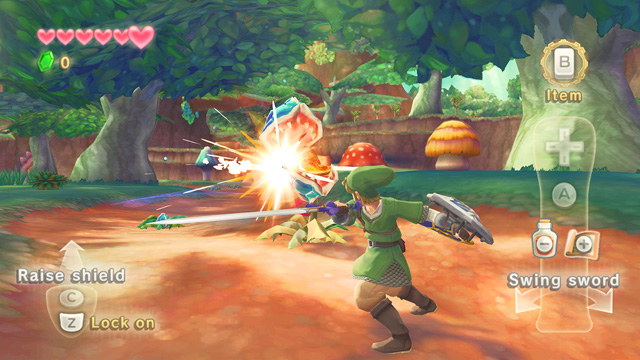 Nintendo has said for the past two years another Zelda game was coming to the Wii, and as rumors leaked yesterday about the title, now comes the first piece of official info…the game will be titled Legend of Zelda: Skyward Sword. Fan-favorite Shigeru Miyamoto demonstrated the title during Nintendo’s E3 press conference, and Kotaku describes the gameplay mechanics:

The game takes advantage of Nintendo’s Wii MotionPlus Wii Remote add-on. Players use the A and B buttons on the Wii Remote, and the C and Z buttons on the Nunchuk. Realistic motion control action take care of the rest. So, for example, target enemies with Z, and swing at any angle to slice and dice.

When players hold Link’s sword up to the sky, players can charge it up with solar energy and then throw sun beams at enemies.

In the game’s HUD, the Wii Remote appears, telling players how to use items, check the map and swing the sword. To use the slingshot, players aim the Wii Remote and tap the A button to shoot.

Zelda fans can exhale now, that is until the release of Skyward Sword.