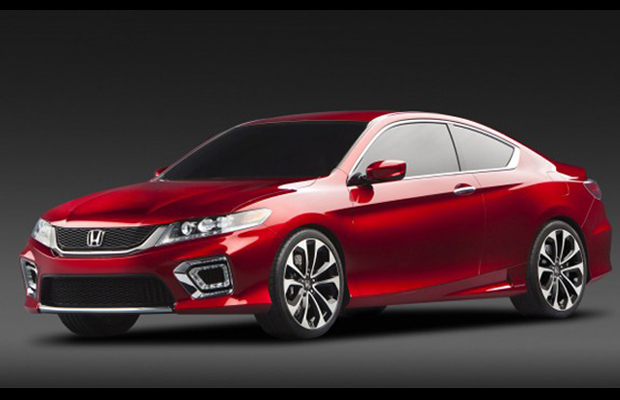 Honda’s pulled the sheets off of its ninth generation vehicle at this year’s Detroit Auto Show, unveiling the stunning redesign of its popular Accord series with this 2013 coupe model. The concept will ride into showroom floors this fall and sports similar features found on some of the more recent Accord models with a wraparound grille and headlights, along with fully sculpted flanks. Honda also says the vehicle’s interior will be spaced out to the same degree as some of today’s cars, except the wheelbase will be shorter and curb weight lower.

Small losses account for larger improvements, and the 2013 Honda Accord Coupe is definitely set to flaunt its goods such as a 3.5-liter V-6 engine with automatic or six-speed manual transmission and more responsive handling. But that’s minor-fillings in comparison to Honda’s announcement of a hybrid sedan version due by end of year 2012.

The company plans on bundling its latest eco-car with its standard plug-in system, which pairs a four-cylinder and 6-kilowatt-hour battery with a 120-kilowatt electric motor to generate a good 10 to 15 miles—all at a top speed of 62 mph. A full recharge of the hybrid’s battery pack is expected in no less than four hours with a standard 110-volt plug, an hour and half with a 240-volt charger.

On the safety end, the Accord Coupe welcomes forward crash and land-departure warning systems that utilize a camera mounted atop the windshield to sense collisions. A multi-angle rearview camera and blind-spot monitors are also equipped. Other notable attributes on both models include an LCD display, text-to-voice capability, Bluetooth technology, and streaming audio capability via Pandora and iPhone.

Pricing and performance specs should be announced within the next couple of months, possibly at the 2012 Geneva Motor Show. But Honda definitely has its 2013 Accord Coupe concepts scheduled for the fall.