What Do Steve Jobs, Thomas Edison, and Amelia Earhart Share In Common? 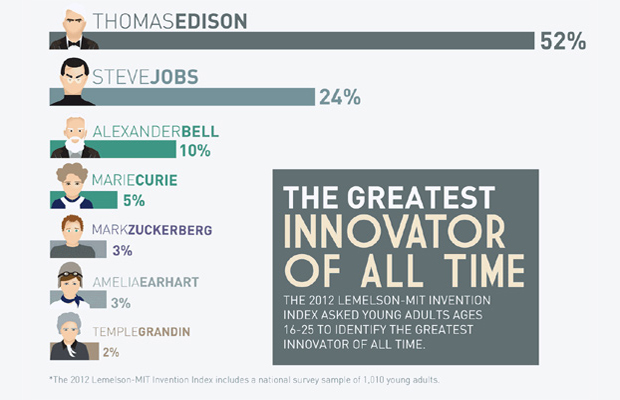 The 2012 Lemelson-MIT Invention Index featured a number of tech greats from the late Steve Jobs (ranked 2nd) to social media visionary Mark Zuckerberg (ranked 5th). According to Mashable, the statistical data was taken from a survey “asking 1,010 Americans ages 16-25 to identify the greatest innovator of all time,” with 52 percent naming Thomas Edison the greatest. As you can see from the lead, Jobs followed next with 24 percent and Facebook kingpin Zuckerberg somehow scored 3 percent of the votes, topping historical greats Amelia Earhart and Temple Grandin. We’re surprised that age demographic knows of Grandin or Alexander Bell’s list of achievements.

The survey was based on a number of scenarios, with 40 percent of respondents saying they couldn’t picture living without a smartphone or tablet. Jobs and Zuckerberg ranked high because young adults felt the products and technologies both tech staples built has created “great influences” in their daily lives. Pretty sad, huh?

“This year’s survey revealed that less than half of respondents have done things like used a drill or hand-held power tool, or made something out of raw materials in the past year. We must engage students in these types of invention experiences as well as provide a strong STEM education to drive future innovators,” said Leigh Estabrooks, the Lemelson-MIT Program’s invention education officer.

Glad to see the youth paying homage to Edison for his incredible work and influence.