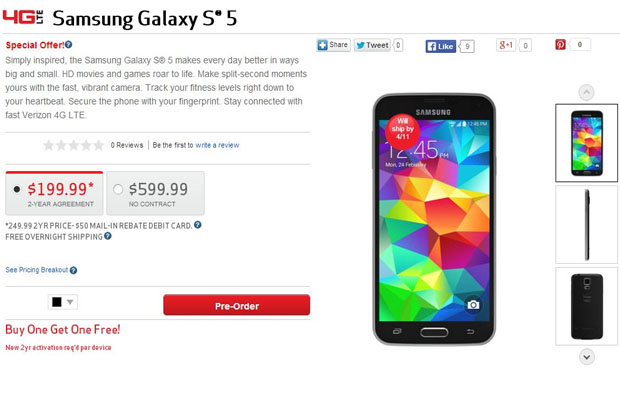 Big Red subscribers just scored the hottest deal of any mobile carrier, as Verizon is not only taking pre-orders on the Samsung Galaxy S5, but also promoting a buy one, get one deal for the new Android powerhouse. The GS5 is priced at $200 with a two-year contract ($600 outright) and will ship on the same day of its global debut, April 11th. Shoppers can choose from a second Galaxy S5 or Samsung’s newest Windows Phone handset, the Ativ SE, which must be ordered right now in order to take advantage of the deal.

The Galaxy S5 will come equipped with a 5.1-inch (1080p) Super AMOLED display, 2.5GHz quad-core Qualcomm Snapdragon 801 processor, 2GB of RAM, 16-megapixel camera, 16GB of storage with a microSD slot, Wi-Fi, HSPA+, LTE, Bluetooth 4.0, NFC, and 2,800 mAh battery. Android KitKat 4.2.2 will also come preloaded on the device, along with an updated version of TouchWiz and a variety of unique featutes that include a fingerprint sensor, heart rate monitor, Ultra Power Saving Mode for extended battery life, and improved S Health app that works with the Gear Fit activity tracker.

Head over to Verizon’s website right now to reserve the black or white GS5…while supplies last.