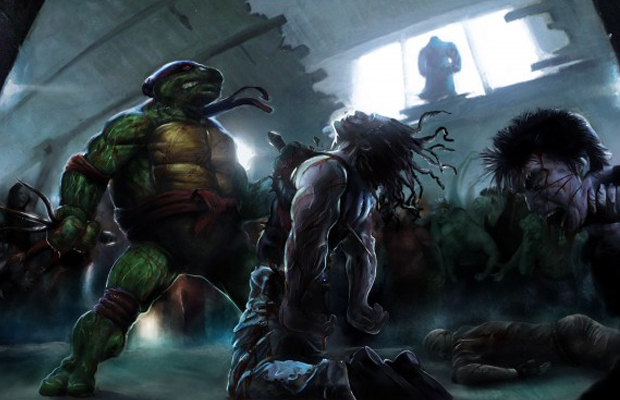 A new year can only mean one thing—the arrival of massive toy fairs across the nation. That usually means tons of film spoilers being leaked before the blockbusters hit the big screen as we’ve witnessed with The Dark Knight Rises and The Amazing Spider-Man. Add the TMNT reboot to the list, as a body over at Idle Hands managed to get a first look at the film’s upcoming lineup and posted detailed descriptions of the characters. Sadly, no photos, so the descriptions will have to suffice.

• Each turtle has the weapons they should have. (YAY!) 2 swords for Leo, a staff for Don, 2 sais for Raph, a pair of nunchucks and a three sectioned staff for Mikey.
• Each turtle looks LIKE A TURTLE and not alien…at all. (BIGGER YAY!) In fact the designs are quite traditional and unremarkable, and feature far less texture than the 80′s movie turtles. Eyes are fairly normal and not cartoonishly large. No beak along the nose area like some speculated. Three fingers and two toes.
• The sort of hunched over posture present in the actors in those leaked set pictures is present here.
• Amazingly, each character appeared to have a different physique with some (like Raphael and Leonardo) having super heroey muscle tone (though Raph appears more pumped up than Leo) and Donatello appearing slimmer..leaner. Michelangelo could possibly be slightly shorter than the rest.
• Each turtle’s mask matches the color from the cartoons.
• Styles of dress are different as well with Leonardo in a sort of pseudo samurai gear get up including shoulder armor, some leg bits, arm bracer and foot wear up to the calf with bindings showing. He might have some armor (non metal) along his chest as well. Donatello’s gear is a mix of techy, modern and a dash of samurai with more normal footwear (for a 2 toed giant turtle), some gadget on his head and gadgetry coming off of his shell. The ends of his mask are far longer than the rest, draping down to his waist. Raphael has adopted an urban warrior look with white, bandage-like wrappings on his feet, right leg, and right arm. He wears this very conan-esque loin cloth..thing..with leather straps draping down as if he were more suited for gladiatorial battle. Michelangelo’s outfit seems the simplest with a hoodie wrapped around his waist, pants and sneakers with the toes cut out, wrappings on his hands and forearms, a necklace (could be puka shell beads?) and his mask ends drape down to his chest. He looks frighteningly ready to spit out some modern catch phrases.
• This guy looks like he owns stock in the Ronco knife company! Pointy edges coming off of absolutely anything. He’ll be the stuff of ridicule for some time. Very overcomplicated outfit.
• Helmet is pseudo-traditional, adopting elements of the classic look (mostly the shape and key elements) with the top coming down over the eyes to the nose. Mouth area is recessed.
• Describing the rest of this armor is a nightmare. Suffice to say, even though he’s covered head to toe in metal armor or blades, his arms are still mostly bare. It’s a bit comical. He’s got the shoulder pieces with the blades coming off them, the shin armor with the blades coming off them, black armor areas to offset the steel parts and a cape that looks metal with blades coming down the side. I’d expect we’ll see him whip that around in battle.
• His only weapons (beyond his whole body) seem to be the bladey thingies coming off his forearm armor. The one on his right arm seems incredibly complicated..maybe a spinning blade?

The Shredder description definitely sounds like Bay made the character overly complicated in design. He did prove us wrong with the first Transformers film. So only the truest ‘80s cartoon fan can have hope for this reboot.