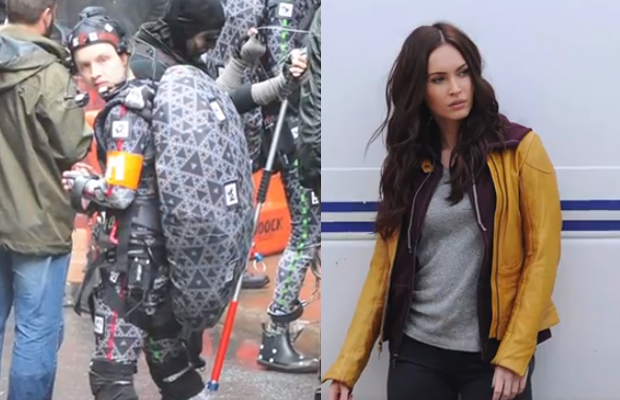 Fans of the classic ’80s cartoon series have slaughtered Michael Bay in the forums for months after the filmmaker revealed some unsettling details about the TMNT reboot. The biggest concern being that all four turtles would be aliens. Then he went on to retract the statement, though a majority of the TMNT faithful believe he will still butcher the franchise one way or another. Well, those curious to see what the film’s looking like might find these stills a bit intriguing.

Filming has begun on the remake and MOVIECLIPSdotcom managed to snag some on-set pics. In the clips you’ll see Megan Fox suited up (and exercising, sorta) as April O’Neil, along with her cameraman who just so happens to be played by Arrested Development star Will Arnett. All four turtles actors were caught on camera with Alan Ritchson (Raphael), Pete Ploszek (Leonardo), Jeremy Howard (Donatello), and Noel Fisher (Michelangelo) decked out in their performance-capture suits as well.

On a side note, Armageddon actor William Fichtner has joined the film, though his role is unconfirmed at the moment. This has Shredder written all over it. Check out the footage below.