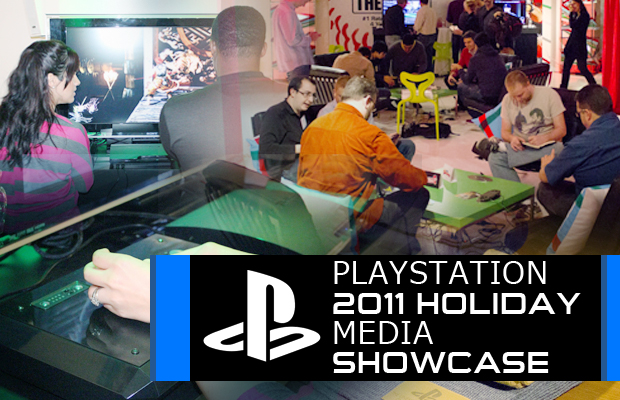 The Metropolitan Pavillion served as the mainstay for Sony’s PlayStation 2011 Holiday Showcase, welcoming several industry experts to check out the gaming giant’s most popular PS3 holiday and 2012 titles, as well an exclusive look at a few of the PlayStation Vita’s launch-slated games. Some of the more anticipated titles on-hand included PS staples MLB ’12 and Twisted Metal; Vita heat-seekers Uncharted: Golden Abyss, LittleBigPlanet, and Resistance: Burning Skies; and the groundbreaking PSN exclusive: Journey.

On the third-party end, Capcom brought out the crossover tag-battle fighter, Street Fighter X Tekken, as Namco Bandi stood a few booths away showing off the visually stunning Soul Caliber 5 due out late next month. As huge fighting game conformists, it’s safe to say neither title disappointed—even if the Hip-Hop Gamer schooled us in 2D combat. Starhawk Senior Producer Harvard Bonin demonstrated the multiplayer beta, which looked absolutely insane, and needless to say drew the biggest crowd. And we’ll be sharing our exclusive video coverage for the third-person action game and the other bigger titles this coming week. So until then, take a peak at the media-only event, and stay tuned!