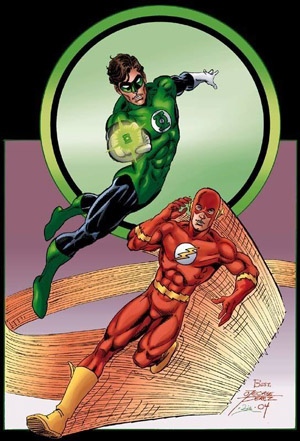 This first Green Lantern film hasn’t even been completed and Warner Bros. is starting development on a sequel, along with a film treatment for another DC franchise: The Flash. THR reports:

“Green Lantern” is a year away from release, but Warner Bros. already is starting development on a sequel.

The studio has hired Greg Berlanti, Michael Green and Marc Guggenheim, all of whom worked on the “Lantern” screenplay, to write a treatment for the second installment.

The trio has also been tapped to pen the treatment for the silver-screen incarnation of “The Flash.”

Under the deal, they would then go on to write the screenplay for one of the two projects, though which one has not been determined.

“Lantern” is shooting in New Orleans under the direction of Martin Campbell with Ryan Reynolds starring as the emerald ring-wielding DC Comics superhero who is part of an intergalactic police force known as the Green Lantern Corps.

Development on a second installment this far out from a movie’s release date is rare, signaling the studio’s confidence in what it sees so far.

It also appears to be the first moves the studio is making under its newly configured relationship with DC.

Warner Bros. aint playing right now with these DC franchises. Guess Marvel and Paramount is putting the pressure on them with this Avengers fever.