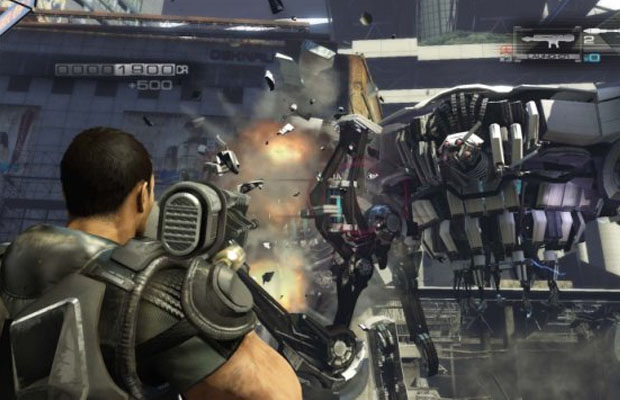 Sega’s team-based third-person shooter Binary Domain has gained some serious momentum leading up to its February 28th release. New single-player details and eight multiplayer modes have surfaced, which you can read below the trailer. Before doing so, watch the video first. Trust us, we had an exclusive preview of the game, and it’s dope.

Here each team must race to capture the other’s data module. This must then be returned to the team console in order to steal the data and score. A strong balance of classes and good teamwork are needed here to ensure you have runners, carriers and defenders in key locations.

In this mode opposing teams must race to control as much ground as possible, with key strategic points needing to be held by one team against the other. The more points you hold at any one time, the greater your teams score. Good co-ordination and movement are vital to winning this mode.

A straight forward game of last-man-standing with the team to have the last player remaining being crowned the winner! Skilled attackers and patient defenders are equally valuable in this mode.

Here one team must defend a set of supplies and another must race to destroy them. A sequence of progressive objectives keeps the goals varied and requires adaptability on behalf of defenders and attackers. At the end of the round, teams swap and play the opposing role.

This modes sees the map strewn with bombs, and the aim is to simply find them, take them deep into enemy territory and unleash hell (well, blow up enemy supplies).

No Multiplayer would be complete without Team Deathmatch; there’s no need for me to explain this one to you – most frags wins!

Bring chaos and destruction to the world of Binary Domain with Free For All mode. Fight across a variety of maps, in an every man for himself scenario of destruction. Kill everyone else as often as possible, the player with the highest score at the end of the round wins. Simple.

The final mode to highlight for you is Invasion. This is a four player mode which sees you working co-operatively in order to defeat progressively harder waves of robot attackers. All skills and styles are tested here as a variety of robot enemies are thrown at you in increasing numbers and difficulty. Adaptability and a keen sense of teamwork is a necessity in order to make it to the end.