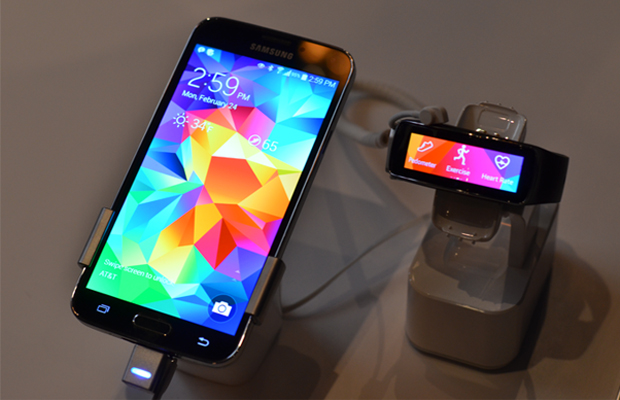 Looks like Samsung had another huge surprise for us today, as the company unveiled its long-rumored fitness band dubbed the Gear FIT during the Unpacked 5 event at Mobile World Congress 2014. The wearable will work hand-in-hand with the recently announced Galaxy S5 and stands out as the ‘world’s first’ curved Super AMOLED wearable. Aside from delivering fitness stats like every other fitness tracker on the market, the Gear FIT can also receive call and email notifications. It also comes equipped with a built-in pedometer, heart rate monitor, sleep tracking sensor, and a timer.

Screen size is maxed at 1.84-inches with 432×128 resolution, while the entire body comes IP57 certified–making it dust and water-resistant. Inside lies a 210mAh battery, which Samsung claims can last between two to three days. While not everyone had the luxury of making it out to Barcelona for the festivities, Sammy invited a select group of media to watch the live stream and offered up a hands-on with the device at its Galaxy Studio pop-up shop in New York City. We managed to get some quick footage of the Gear FIT in action for your viewing pleasure. Check it out.

Related: 7 Major Things You Want To Know About The Samsung Galaxy S5