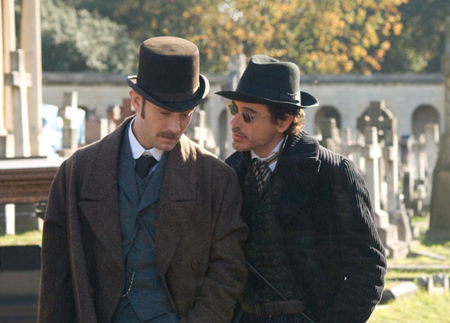 Looks like that Sherlock Holmes crew is getting a little comfortable dropping out of projects in favor of others. A few weeks ago Robert Downey Jr. dropped out of Cowboys and Aliens to work on the Sherlock sequel, now director Guy Ritchie is apparently dropping the DC Comics adaptation of Lobo to work on the blockbuster follow-up. Producer Joel Silver spoke with the L.A. Times and talks about Ritchie’s latest decision:

“I don’t think he’s going to do it now,” Silver said of Ritchie directing “Lobo.” “The studio wants us and Guy to focus on making another ‘Sherlock Holmes.’ So I think we’re going to be doing that. But we’re seeing what happens with this. Everybody is analyzing everything. It’s all kind of happening right now as we talk. ‘Sherlock’ is sitting at just about $400 million in worldwide gross and showing itself to be pretty effective and pretty strong. So we’re trying to see if we can do something quickly with another ‘Sherlock Holmes’ movie. We have some ideas and some good story points…Downey loves the experience of playing Sherlock and would love to play him again, and I’d love to see him play it again. Jude and all of them will be back and it will be great.”

Sounds like the former Mr. Madonna might just do the boogie and stick with the Sherlock franchise. Smart move mate!