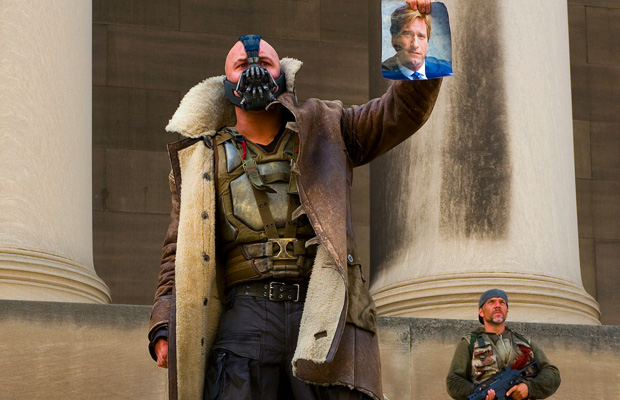 ComicBookMovie member DeadAiradio has posted what he claims to be a few spoilers for the upcoming Dark Knight Rises. According to dude, a friend recently caught an early screening of the film and shared the following: (POSSIBLE SPOILERS LAY AHEAD!)

1. Bane has only a few scenes intill he get into gotham
2. Lazarus Pit is in the film only for a few Secounds
3. Catwoman dose not have a big role in the film
4. Ra’s is in the film both young and Old ( Not much)
5. cameo when catwoman is dancing his Batman in that trailer 2 a person named Edward Nigma shows up at the party.
6. BANE dose get BIG
7. The whole 6mits clip at IMAX the blood thing had something that bane needed to get his vemon !
8. Talia al Ghul is in the film and she fall in love with Wayne

9. The Prison in trailer 2 Wayne is looking for Ra’s he knows that he was alive but Bane and his people got Wayne and locked him up

10. Bane brakes Batman back in 45mits in the movie

11. Another Cameo a kid named Terry shows up for a job.

CBM is usually a reliable source for the latest DKR updates, and some of what DeadAiradio shares seems realistic in theory. But we shouldn’t take any of these spoilers serious until we get some of the others viewers reactions who were at the same screening. So who’s willing to back DeadAiradio’s claims?