Marvin the Martian Ruins Christmas in 2011 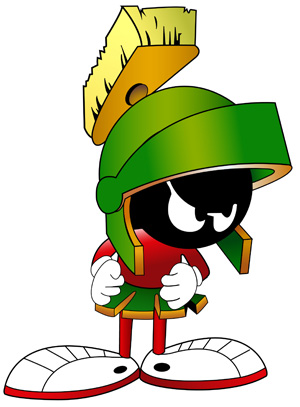 Would of seen Bugs or Daffy having their own film before Marvin the Martian, but ok. The LA Times reports Shrek himself, Mike Myers, will voice the extraterrestrial, which will receive the CGI treatment (ala Garfield and Alvin and the Chipmunks) for his big screen solo adventure. The story will be penned by Spin City writers Paul Kaplan and Mark Torgove, and will revolve around Marvin coming to Earth and destroying Christmas; until his plans are ruined and he gets trapped inside a gift box. Whoever thought of that is more kookey than the Looney Tunes characters. Marvin should be ready to blast innocent bystanders during the 2011 holiday season.