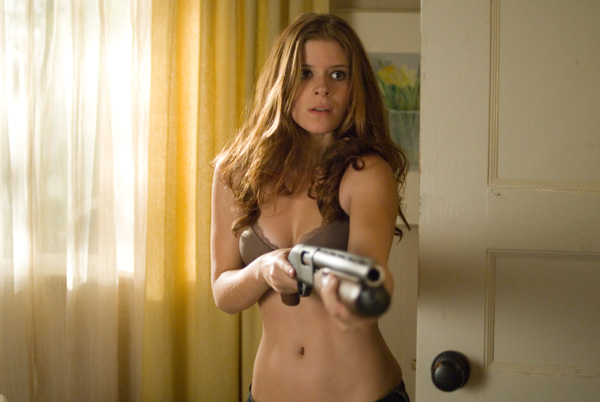 The Mara sisters have definitely made their mark as the next-generation of Hollywood starlets. Rooney Mara’s Oscar-nominated role for The Girl With The Dragon Tattoo has catapulted her to the A-list, while big sis Kate (127 Hours, Shooter) has continued to snag roles in blockbuster films. But there was one recent role she screened for that nearly had her purring more than a frisky feline: the lead as Selina Kyle AKA Catwoman in The Dark Knight Rises.

During her discussing with the sports reporter, Kate talked about testing for the upcoming Batman sequel and admiration for director Christopher Nolan.

Did you see Hines’ stint as a Gotham Rogue in the new Batman trailer? In a way you almost worked alongside Ward … is it true you were being considered for the role of Catwoman?

No, I haven’t seen the trailer yet but I am sure it is awesome. Christopher Nolan is one of my favorite directors and just to get the opportunity to test for such an iconic role as Catwoman was a honor. I couldn’t talk about it for a while because the movie was so top-secret but I am excited to see how it all turns out.

At least she can celebrate the Giants win in the meantime. Now we know she was one of the hundreds of actresses who tested for the Catwoman role. We’re just curious to see which other hot stars followed up.