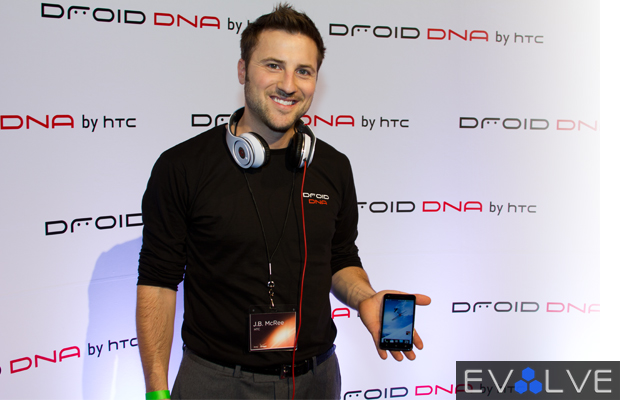 Most of the speculation and leaked reports have led up to this—the official announcement of the HTC Droid DNA. Verizon’s new flagship Droid model seems poised to crush the competition this holiday season. Its ridiculously powerful spec sheet can easily attest to that, but in reality, the handset’s $200 launch value (w/two-year contract) solidifies the remark at best. If not, then I guess we’ll just have to get you re-familiar with the lies under the hood. Let’s see here: a 5-inch 1080p Super LCD3 display (440ppi), 1.5GHz quad-core Qualcomm processor, 2GB of RAM, 16GB of onboard storage, Jelly Bean, and HTC’s Sense 4+ UI. iPhone what now? Exactly.

In attendance for the major announcement in NYC, EvoveTV caught up with HTC rep, J.B. McRee, who gives us an entire hands-on breakdown of the Droid DNA, while showing us the device’s wireless charging functionality and additional accessories. Hands down the must-own Verizon phone of the holiday season. Take a look.