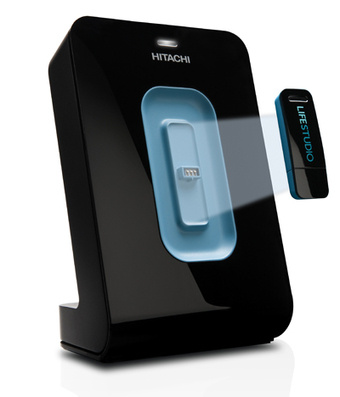 The LifeStudio hard drive comes in a mobile and desktop form (the former runs 250GB, 320GH, and 520GB; the latter 1TB or 2TB), and leverages the Cooliris (if you tried it on Firefox then you know how cool it looks) platform for easy 3D navigation. That ease comes from the LifeStudio’s automatic organization of your content by file type and date.

It’s more than you’ll get from other hard drives, but knowing that the software is capable of that kind of automatic categorization makes you wish there were more options—sort by name, for instance, or size. But that’s a minor point, and one that will be addressed via software updates from Hitachi based on user feedback.

LifeStudio also features social integration for uploading and viewing content on Facebook, Flickr, and Picasa, with more partners possible, again pending user interest. There’s also premium content available, through Cooliris, in the form of CBS, Hulu, and more. It’s hard to imagine you’d get to those outlets through your external hard drive, but even if you don’t tap into it, it’s nice that it’s there (albeit ad-supported).

You can also do local backup and online storage within one interface, and by switching a single button. For cloud storage, the first 3GB are free, while 250GB will cost $49/year. Requisite iPhone and iPad apps mean that you can access files from those devices, or from any browser. And as another fun first, LifeStudio Plus products feature an integrated USB key that starts comes with a 4GB microSD card and can be customized up to 32GB. There’s currently only one key per drive, but in the future Life Studio is expected to support multiple keys.