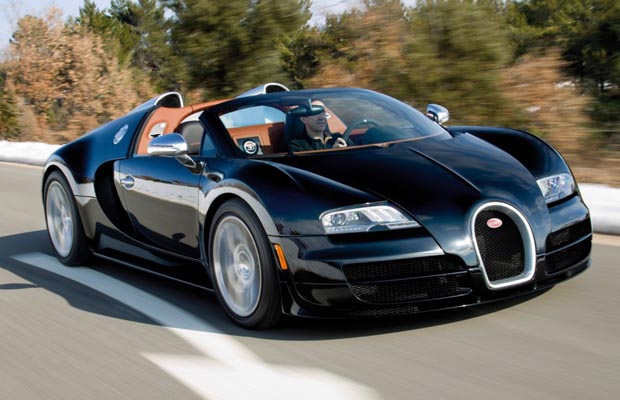 We’ll give you a minute to wipe the drool from your keyboard or iPad touchscreen. Yes, you’re looking at on the latest Bugatti model: the Bugatti Veyron Grand Sport Vitesse. The luxury auto company had plans of pulling the covers on the supercar at the Geneva Motor Show 2012, but insisted on unveiled it a few weeks earlier. We ain’t mad. The whip is a crossbreed of the Super Sport and Grand Sport, combining the high-speed performance and lifestyle representation of both Bugatti stunners. Under the hood lies a quad-turbocharged 8.0-liter W-16 engine capable of powering up to 1,200 Hp and 1,106 pound-feet of torque.

Bugatti CEO Wolfgang Dürheimer touched on new Veyron stating the following: “The rapid success of the Super Sport convinced us to increase the performance of the Bugatti roadster. Once again our engineers worked hard to demonstrate that Bugatti is able to constantly redefine the boundaries of what is technically feasible.”

Another sweet fancy on the Veyron is its roofless ‘targa’ option rather than the traditional full convertible top. Bugatti has yet to announce any pricing or final performance figures, but we’ll get the full rundown at the international auto show this March. Like?