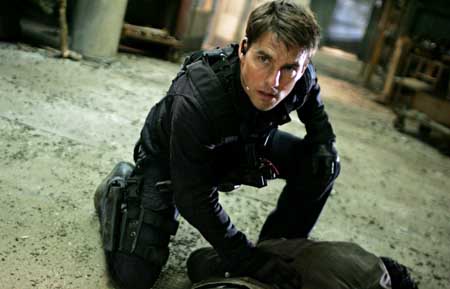 MTV recently caught up with action-genre badass J.J. Abrams to discuss the recent status of Tom Cruise’s possible return for Mission Impossible 4. See what the Star Trek director had to say about being Ethan Hunt back to the screen for an unnecessary fourth adventure:

“The goal would be for that to occur,” Abrams said, skirting around actually mentioning anyone or anything by name. So Josh pressed him a little.

“If I say the words though– I’ve seen what you do,” the “Star Trek” director said with a smile. “You warp and twist, you make me say things that just break me down.” Turning serious again, Abrams acquiesced. “The goal would be for Tom [Cruise] to be in the film.”

What he wouldn’t say anything about was the story, other than admitting that there is one. “A script is being written,” Abrams said. “There’s an insanely long outline, it is probably longer than the script. It’s going great… we’re very excited and we’re looking to make that movie.”

Note: By having Tom Cruise back, there’s no implication that he will be the main star.