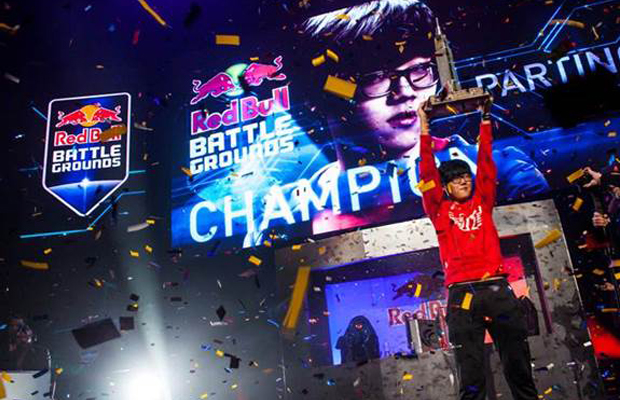 Red Bull Battle Grounds hit New York City’s Hammerstein Ballroom this weekend to bring one of the biggest esport tournaments ever the Bigg Apple has witnessed. It started off with 8 players battling each other for the top prize of $50,000 and a chance to be crowned 2013 Battle Grounds Champion. The players entertained a packed house of 2,300 fans watching, along with an estimated account of over 75,000 peak views to a live digital audience where fans started to tune in on their mobile from around the world.

After Day One, only 4 players stood: 2013 World Champion Kim Yoo Jin, known as sOs; Red Bull Battle Grounds 2012 Champion Jang Min Chul AKA MC; 2012 World Champion PartinG; and the ONLY female player who was a fan favorite this weekend Canadian player Sasha Hostyn known as Scarlett. PartinG took out MC in the first of two semi-finals taking it 3-1. The second semi-final saw Scarlett go up against the World Champion sOs.

Even though she lost to sOs and took 3rd, “Scarlett was still a winner to her fans and played an amazing game. The final match brought two most aggressive players and World Champions from Korea together to play in a best of seven series. PartinG took and shutdown sOs with a 4-1 finals victory, which earned him top prize and the crown of 2013 Red Bulls Battle Grounds Champion.