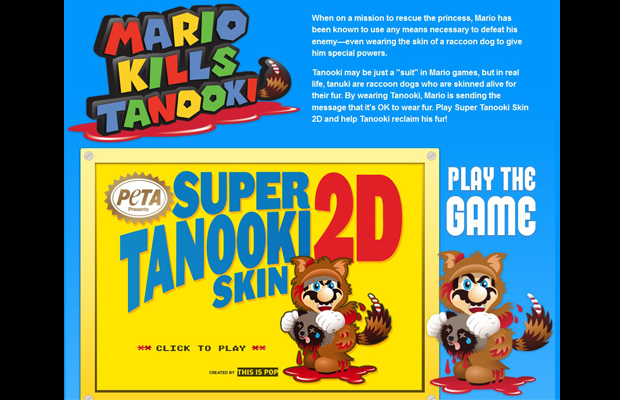 Who knew Mario could be viewed as a figure of animal cruelty? Really? C’mon. PETA strikes again after attacking Nintendo’s mascot for sending the wrong message by wearing the fur-laced “tanooki” suit:

Tanooki may be just a “suit” in Mario games, but by wearing the skin of an animal, Mario is sending the message that it’s OK to wear fur. We created our game to help inform people that in real life, Mario would be wearing the skin of an animal who was beaten, strangled or electrocuted, and it wouldn’t give him any special powers other than the power of self-deception.

PETA Executive Vice President Tracy Reiman continued the tirade by saying, “Tanukis are real-life raccoon dogs who are beaten and, as PETA’s undercover exposés show, often skinned alive for their fur…This winter, everyone can give raccoon dogs and other fabulous animals a 1-UP by keeping our wardrobes fur-free.” Hold on a sec…LOL! Unbelievable. Then again, we’re talking about the same organization that called out EA for having the protagonist of Battlefield 3 stab a rat. Thoughts?