Will ‘The Dark Knight Rises’ Use The Wall Street Protests As Back-Drops For Gotham Chaos? 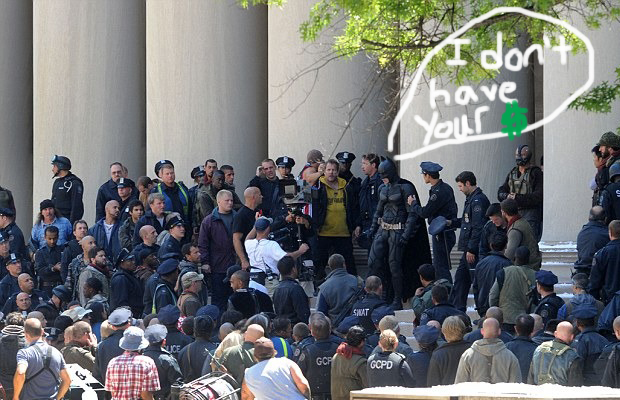 It’s been said that Christopher Nolan had plans of shooting a few scenes in New York for The Dark Knight Rises within the next couple of weeks. According to EW, Warner Bros. has scrapped the idea and has no plans of shooting in Zuccotti Park: the home base for Occupy Wall Street protestors. The magazine also points out that an open casting call had hit the web last week with the Zuccotti Park being mentioned as a possible shooting location, but an anonymous source told the LA Times, “Cast members have been told the shoot could include scenes shot at the Occupy Wall Street protests” and that Nolan could be using “the protests as a backdrop or a stand-in for something that already exists in the film,” but that simply doesn’t seem to be the case.”

There’s still the possibility of Warner Bros. using footage of the Wall Street protests as back-drops for some of the film’s action scenes, but the film studio could face legal action over the move since it would not provide compensation for extras. If you ask us, the NYPD could use the assistance of Gotham’s finest.