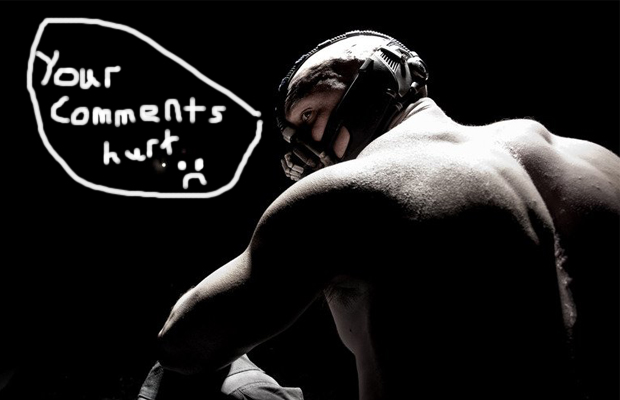 Since Christopher Nolan cast his Inception protégé, Tom Hardy, as the antagonist for third Batman film, The Dark Knight Rises, fanboys have lit up the forums complaining about the actor’s physical stature in the role of Bane. Hardy shared his sentiments with Cinemovie, saying he has cried over the negative comments and has the utmost confidence in Nolan’s vision:

“I’m at 190. [lbs] Bat-fans want me to be over 220lbs. 400lbs. I’m like dude! Batman is like Superman, Spider-Man — he belongs to so many people. So many people love him. He belongs to them, and when you step into that kind of character, you are going to fail. And be judged. I’m human, and I do read things. I read the comments, and I cry. I can’t cry for everybody. I just give them a job, and be the best that I can be. Just trust me. I trust Nolan.”

That makes him even less menacing right now. Might have shared a little to much buddy. But who are we to judge. The film is going to be sick either way.