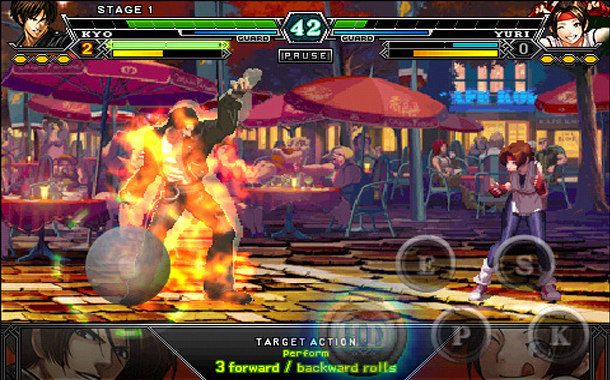 iOS has all the fun. As if Apple touch-device owners didn’t have enough to gloat about, now they have one of the greatest fighting titles to add to their long list of App Store downloads: The King of Fighters-i.

The SNK-based title will feature four modes: “Team Battle” mode for some 3-on-3 action, “Single Battle” for 1-on-1 fights, “Endless” mode for an endurance challenge, and “Training” mode to hone your fighting skills. The fighter relies on the touchscreen virtual pad/joystick, which shouldn’t be too hard to master, and is set to feature 14 characters, as well as 6 additional fighters via additional content come October.

As long as you’re on an iPhone 3GS or 3rd generation iPod touch, and procure iOS4.1 and later, you’re ready to throw down some sick combos. Download it now from the App Store for $7.99.