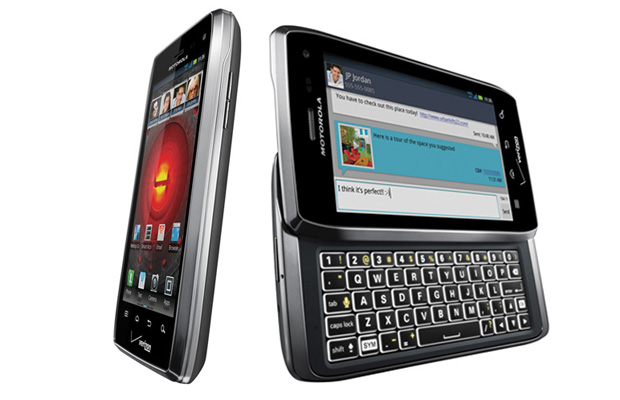 It was only a few months back when Motorola unveiled the Droid 3. Packing more power under the hood and sporting what many regard as the best QWERTY keyboard of any Android handset, Moto’s last entry in its flagship series did little to standout amongst the likes of other popular handsets such the MyTouch Slide 4G and the Droid Bionic. However, even after launching two different Droid RAZR models within the past three months, the manufacturer has decided to launch the heavily delayed Droid 4, which tackles a RAZR-esque design, 4G (finally), and an improved keyboard. So how does it stack up against Verizon’s other 4G behemoths? And could this be the last great QWERTY handset we lay our hands on? The critics weigh in. Check out this Droid 4 review round up.

Joseph Volpe (Engadget)
“Tailored less for trend-seeking consumers and more for power users (or prosumers), Moto’s QWERTY flagship hits a handful of high marks, offering up one of the best physical keyboards on the market, access to Verizon’s 4G LTE speeds, a responsive touchscreen and suitable battery life to accompany the demands of on-the-go productivity — all for $200 on a two-year contract…As it stands, the Droid 4 marries two concentrated markets: consumers clamoring for physical keyboards and the enterprise set.”

Brian Bennett (CNET)
“Melding an excellent keyboard, swift LTE data, and a 1.2 GHz dual-core processor into one Android device, the Motorola Droid 4 is long overdue. Fans of the first Motorola Droid will find plenty to smile about here, but those who aren’t married to a QWERTY may not enjoy carrying around such a massive phone…Those still rocking original Droids, and who have been holding out for LTE plus dual-core processing, will want to make a beeline for this device. Even folks moving from aging BlackBerrys will like this phone’s mix of features.”

Chris Burns (SlashGear)
“Finally the one-two-three punches of Verizon’s 4G LTE, a dual-core processor, and an 8 megapixel camera capable of 1080p video has come to the DROID line of QWERTY keyboard-having Android devices…The DROID 4 is the bulkiest device on the Verizon network here at its launch, yet at the same time it’s got the nicest keyboard Motorola has ever offered on a smartphone. If you’re so in love with the basic QWERTY DROID line that you’ve sworn off all other smartphones, it’s time to upgrade to this model…This device certainly deserves to have a spot amongst the high-end line of Android devices at its release, but will be forgettable within a few months at the dawn of the quad-core smartphone and the start of the Ice Cream Sandwich having Androids being released in bulk closer to the middle of the year.”

Sascha Segan (PCMAG)
“Cast off your BlackBerry for good. If you’ve been waiting for a no-compromises, keyboarded super-phone, the Droid 4 ($199 with two-year contract) is for you. It blows away its competing smartphones, most notably with its excellent QWERTY keyboard…The keys are well-separated, wonderfully tactile, and gloriously backlit. Yes, my fingers hit the top of the keypad sometimes when typing numbers, but I didn’t find the top row of buttons difficult to type on…Battery life was excellent. I got an awesome 11 hours, 47 minutes of 3G talk time on the 1,785 mAh battery…Its top competitor is the T-Mobile MyTouch 4G Slide ($199, 4.5 stars), which has pretty similar capabilities, but I’d note that the Droid 4’s keyboard and voice call quality are both better, and Verizon’s LTE is about twice as fast as T-Mobile’s.”

Kevin Krause (Phandroid)
“The Motorola Droid 4 continues to improve upon the design of the QWERTY-slider handset, upping the specs yet again and adding in a first for the line, 4G LTE. Motorola has again made strides to improve the keyboard and has added in a few new software twists to round out the latest edition of the Droid…I am on the record as someone who actually liked the original Droid’s keyboard and missed the D-pad when they did away with it, but I can’t deny that Moto keeps making this thing better and better…Is this the best Droid yet? In many ways, yes. But it won’t revolutionize the phone landscape in the same was as the original. The phone doesn’t feel quite fresh enough to get us raving about it, but it doesn’t do much wrong at the same time.”