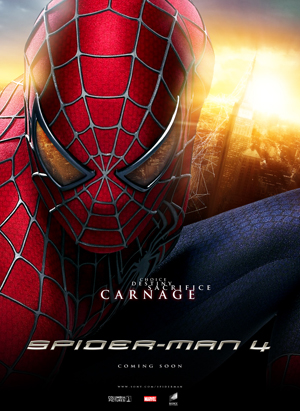 What a rip. The Hollywood Reporter reports the fourth installment of the Spider-Man franchise is officially cancelled. Rumors of turmoil between franchise director Sam Raimi and Columbia Pictures execs concerning the villains of the fourth film began to spread across the net, and the film studio has officially parted ways with Raimi. Marvel Studios will now look to reboot the franchise and are aiming for a summer 2012 summer release date. Read the trades after the jump…

Columbia and Raimi put on a unified front Monday when making the announcement they were parting.

“A decade ago we set out on this journey with Sam Raimi and Tobey Maguire, and together we made three Spider-Man films that set a new bar for the genre. When we began, no one ever imagined that we would make history at the boxoffice, and now we have a rare opportunity to make history once again with this franchise.

“Peter Parker as an ordinary young adult grappling with extraordinary powers has always been the foundation that has made this character so timeless and compelling for generations of fans. We’re very excited about the creative possibilities that come from returning to Peter’s roots and we look forward to working once again with Marvel Studios, Avi Arad and Laura Ziskin on this new beginning,” Sony Pictures co-chairman Amy Pascal said in a statement.

Said Raimi: “Working on the Spider-Man movies was the experience of a lifetime for me. While we were looking forward to doing a fourth one together, the studio and Marvel have a unique opportunity to take the franchise in a new direction, and I know they will do a terrific job.”