That thin line between scrawny, basement dwelling, pimple faced gamer and bonafied jester of rock just got thinner. Both Activision’s “Guitar Hero” and Harmonix Music System’s “Rock Band” video games are getting some new pieces of hardware that are pretty close to the genuine article. 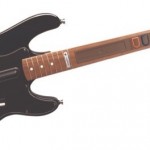 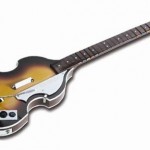 John Lennon’s Rickenbacker 325, George Harrison’s Gretsch Duo Jet and Paul McCartney’s bass (pictured, respectively, in the right column) will be sold alongside The Beatles: Rock Band for $100 each this September and are compatible with all platforms. Paul McCartney’s bass will also be included in the Limited Edition, premium bundle of the game.

The black Logitech Wireless Guitar Controller Premier Edition (pictured in the left column) is a PS3/PS2 Guitar Hero exclusive and will run you about $199 when it’s released this month (May). The press release after the jump.

Following the introduction of the Logitech Wireless Guitar Controller, Premiere Edition (previously available only in select markets), the new black guitar controller is expected to be available worldwide later this month. The Logitech Wireless Guitar Controller is licensed by Activision Publishing, Inc. (Nasdaq: ATVI) for the award-winning Guitar Hero® franchise.

“Logitech’s new guitar controller delivers the same unparalleled Guitar Hero experience offered by our previous premiere edition to an even broader group of gamers and at a great value,” said Ruben Mookerjee, Logitech’s director of product marketing for gaming. “Everything about the Logitech Wireless Guitar Controller is premium – from the authentic wood material and flawless black finish, to the noise-dampening design of the strum bar and buttons, to the authentic accents provided by the metal frets.”

The Logitech Wireless Guitar Controller offers a one-piece contoured wood body preferred by many of the world’s leading rock guitarists. For reduced button noise, Logitech uses rubber dome technology on the fret board controls, the same material used in its award-winning keyboards. The guitar controller also incorporates a touch-sensitive slider, located on the neck of the guitar controller so you can rack up the points.

So you’ll be free to go where the music moves you, the Logitech Wireless Guitar Controller lets you jam at a range of up to 30 feet from the console and offers hundreds of hours of battery life.

The Logitech Wireless Guitar Controller will be available in a pristine black finish complemented with a glossy black pick guard.