Renault Kwid Concept Comes With Its Own Drone 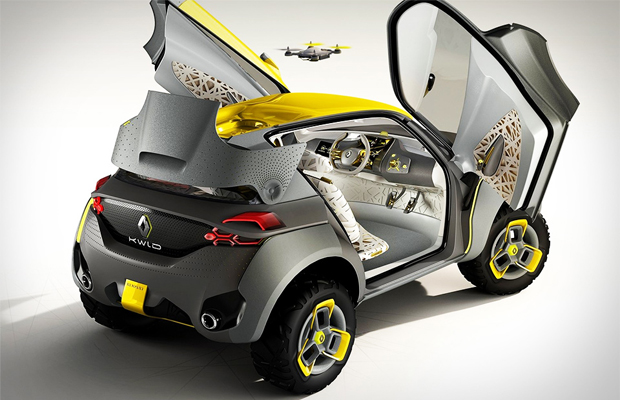 If you’re into the most bizarre concept cars, look no further than the Renault Kwid. Aside from its wild design, the futuristic hatchback also comes equipped with its own aerial drone. Wait…what? Yes. A freaking drone!

The quadcopter can be docked on the rear portion of the roof and can fly above the car as it hits the skies to gives drivers an aerial view of traffic. It can be piloted by automatically or manually, which is controlled from a built-in tablet in the dashboard. That’s pretty freaking insane.

Brand Manager and Innovative Cooperative Laboratory Manager for Renault, Serge Mouangue, shared the company’s vision on the Renault Kwid during its unveiling at the Delhi Auto Show 2014 saying the following:

“Customers in new markets are much younger. Their expectations are different and customers are basically gamers. This concept car meets those needs in a variety of ways, but mainly thanks to the Flying Companion, which makes driving both safe and fun. This is the very first time we can drive with an eye in the sky.”

The Renault Kwid also features two-wheel drive, 1.2-liter turbocharged engine, and five-passenger seating. Whether it has the slightest chance of hitting the market (limited or worldwide) remains unknown.