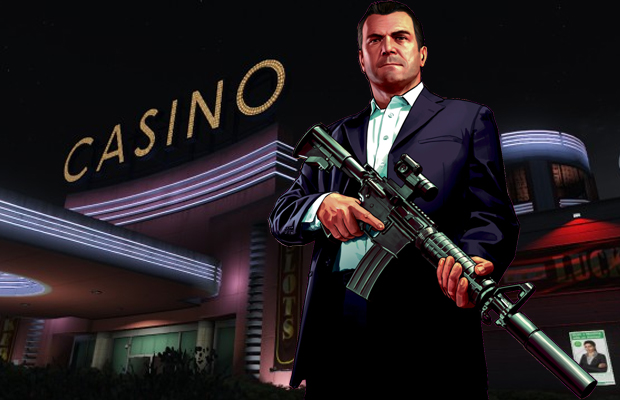 Rockstar looks ready to drop some more DLC goodness for GTA V, which will include new outfits and the opening of another casino. Diehard fans discovered source code for GTA Online and found potential spoilers for the downloadable pack, stumbling up the findings when they entered the casino front, where there were three tablets on the left and the right side of the entrance, granted the place were there would be more rooms wasn’t accessible.

Fans have been observing the existing casino in the standard game for a while, which now has an “Opening” sign all over it, suggesting the gambling spot will be coming soon online. Rumor is some players were able to enter the casino when GTA Online launched, but discovered nothing was inside. Possible games being rumored for the casino include blackjack, poker, roulette, and slot machines.

A new save slot for outfits could be in the works—a huge demand from players as they’ve had to buy these costumes, despite the game only allowing them to keep one at a single time. This would be a good sign of Rockstar converting GTA Online into a standard MMO, though we can see how the gaming giant would want to stray away from the norm.

GTA V for the PS4, PC, and Xbox One hits stores this fall.