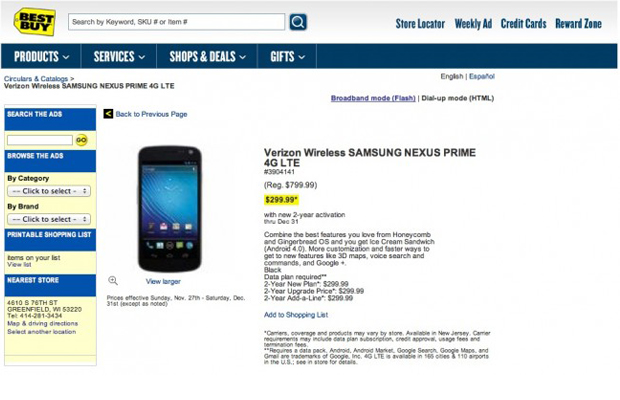 This isn’t the first time the retailer has made the mistake of confusing the Samsung Galaxy Nexus with the previously codenamed Nexus Prime. In fact, you’ll find several journalists confusing the two here and there. Anyways, while the mislabeling of the phone on Best Buy’s new landing page might provide mere comic relief for technophiles and Android conformists, we see the bigger news coming from the actual price listing: $299 (w/two-year contract). Rumors have spread throughout the past couple of months of the Galaxy Nexus being priced at nearly $400 with a new contract agreement, but with the Ice Cream Sandwich-ready smartphone hitting retailers in December, the odds have the price tag in favor of three Benjamins. Now we await Verizon to announce the official release date, which to no surprise, is being rumored for December 8th. Maybe the carrier will actually let us know what the phone goes under these days.