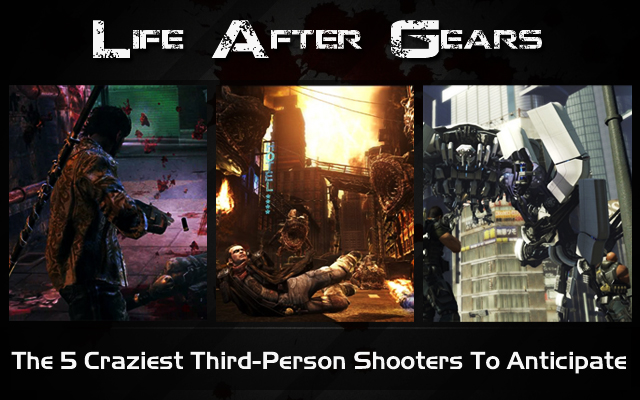 Five years ago, creator Cliff Bleszinski and his developers over at Epic Gamers redefined the third-person genre with the masterpiece shooter known as Gears of War. Dope gameplay, cinematic visuals, incredible boss battles, and an emotional storyline that drew you into the apocalyptic battlefield of Sera—some might call it the definitive Xbox 360 IP. Sorry Halo fanboys. With Gears of War 3 closing out the final chapter in the saga of Marcus Fenix and his band of COG brothers, one question remains: What will become the next great, must-buy third-person shooter?

C’mon, we already know you’ve chainsawed your way through the GOW3 single-player campaign, and have put in more hours on Xbox Live via online death matches than you normal do playing Madden ’12. So it’s only a matter of time before you put down the controller and hit up GameStop to feed your shooter addiction. Realistically, we don’t expect any game to surpass Gears, at least not anytime soon. But that doesn’t mean there aren’t some great games on the horizon. And we found five that offer just enough high-octane action to appease every hardcore gamer going into the final days of this generation’s gaming cycle.

Expected: 2/7/12
This gravity-defying shooter takes place in the near future, where gamers controller enforcer David Russell (or his neighbor Leo Delgado), who must save his daughter from an enemy known as the “Lutadore.” Aside from being strapped with the latest conventional blasters, you’ll master the forces of gravity to break though destructible environments and turn enemies into levitating targets. What really makes Namco Bandai’s title unique is its zero gravity gameplay, which requires players to maneuver and shoot strategically when stranded on surface levels. Plus crazy weapons like the Grav Link can increase or decrease the level of gravity in your vicinity and open the lane for numerous tactical firing options. Best of all: co-op gameplay.

Expected: 2/7/12
Sega’s squad-based shooter takes cues from both Gears of War and the underrated Vanquish to bring forward amazing gameplay and innovative enemy AI. Man a seven-member operative group (three via d-pad or voice command), each with their own specialties and custom weapons, against the “halo children”—androids that assume they’re human and roam the city streets of Tokyo in 2080. Expect tons of blind-fire action and some ridiculous boss battles that’ll force gamers to utilize their squad’s greatest strengths in order to move forward. Trust plays a vital role in story mode, as the team shapes their opinions and decisions based on your actions. As far as weapons, we’ll let the trailer speak for itself.

Expected: Q1 2012
Bizarre doesn’t even begin to explain Konami’s high-octane acid trip. As a demon bounty hunter cursed with the gift of immorality, Bryce Boltzmann feeds his thirst for money and revenge by (spoiler) hunting demons. Ok. We know what you’re thinking: Devil May Cry rip-off. But NeverDead is definitely more shoot’em up than hack-n-lash, allowing gamers to dual-wield weapons and put Bryce’s body to good use, literally. Picture turning into a walking time bomb and detonating around a swarm of creatures. Now picture trying to reattach your body while shooting with one arm and searching for your other limbs. Sounds complex and difficult, huh? Let’s just say being immortal has its moments.

Expected: 2013
What else should we expect from the sick ingenious mind of Tomonobu Itagaki? The man behind the next-gen Ninja Gaiden and Dead or Alive series pushes third-person shooters into another dimension by combining “deep melee and fighting systems” with over-the-top kills. This game is still early in development, but from what we’ve gathered so far, you’ll have two characters to choice from: a male sharpshooter with a focus on shedding bullets and a female assassin that’s both agile and swift with her blade. It might still be too early to tell, especially with its 2013 release window. Though judging by this 2010 trailer, Devil’s Third looks bonkers. And we can’t wait to get our hands on it once Valhalla Game Studios completes it.

Expected: TBA
There was a rumor floating around that Deep Black had been cancelled, but according to the game’s Facebook page, it recently passed the Xbox 360’s pre-certification stage. So it’s game on. A change of scenery from the standard shooter, most of the action takes place underwater, while playing out as a cover shooter during land missions. Besides the promise of great water physics, you’ll have access to underwater jet packs with integrated harpoons, mini-submersibles, and other high-tech weaponry to help you take out the bio-terrorist threat. Hopefully we see it on PS3, Xbox 360, and PC in 2012.