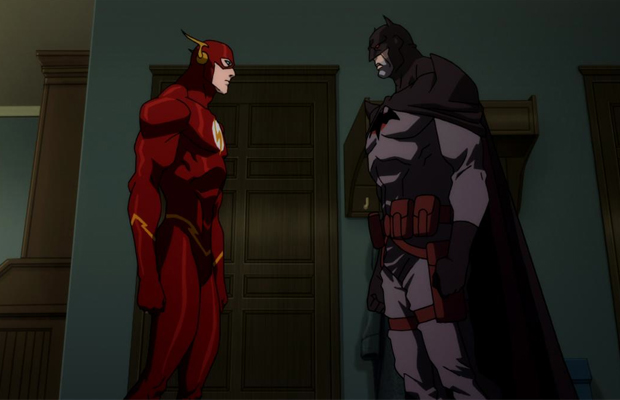 Warner Bros. just launched the Justice League: The FlashPoint Paradox trailer, providing a closer look to the animated feature of one of the most pivotal moments in the DC Universe.

In 2011, Geoff Johns and Andy Kubert created a miniseries that flipped the DC Universe on its head and rebooted a number of franchises, giving fan favorites new looks (and origins), while adding some new faces, which gave us the new 52. The event and miniseries, Flashpoint, set Barry “The Flash” Allen on a trip through time to right a wrong done to his family that rippled through the timeline with disastrous consequences. The Flash awoke in a modern world ravaged by war with no Superman or Justice League. Without his powers, Allen must solve the mystery of what happened and enlist help to fix the timeline.

The Flashpoint Paradox comes to video on July 30th with the Blu-Ray/DVD combo pack featuring the following:

• A Flash in Time: Are there other dimensions? Can time travel get usthere? And if The Flash existed, could he really travel through time?
• Interviews with experts in mythology, theoretical physics and top DC writers will examine the science and legacy of the storytelling behind the fiction.
• My Favorite Villians! The Flash Bad Guys: Acclaimed DC Comics writer Geoff Johns and others share their favorite Flash villains in this short film that gives viewers a glimpse into the Flash’s world through the eyes of some of the nefarious characters he has encountered over the past 70 years!
• A Sneak Peek at the next DC Universe animated movie: An in-depth look into the next DC Animated feature film, spotlighting the cast and crew.
• From the DC Comics Vault: Bonus cartoon episodes
• The Flashpoint Paradox Audio Commentary

Check out the trailer below.

Related: Superman Does Want a Batman Crossover Film
Related: Is Zack Snyder Being Courted To Direct the Justice League Movie?