Is Black Cat Set to Cameo in ‘Amazing Spider-Man 2’? 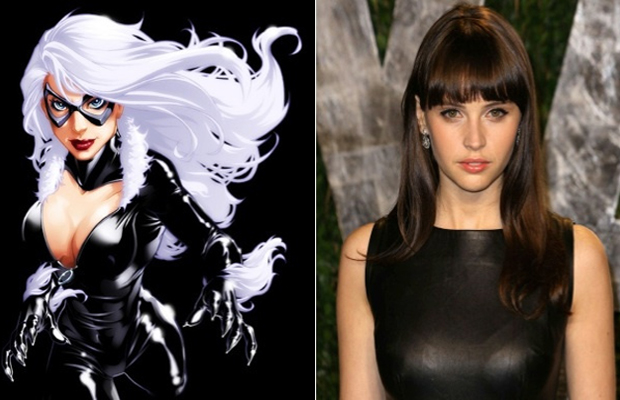 Sony’s made no secret about bringing every major Spidey villain to the big screen in the upcoming Amazing Spider-Man films, especially the sequel. Rumors of the Sinister Six emerging in the next film, even possibly earning a spin-off, has been discussed over the past several months, though aside from the Green Goblin, Rhino, and Electro, we haven’t heard much about some of the other baddies Sony looks to integrate in the Amazing Spider-Man 2.

Casted actress Felicity Jones recently talked with Collider to discuss the rumors of her portraying either Felicia Hardy (The Black Cat) or possibly Lily Hollister (Menace)–mentioning the possibility of her donning a costume on the big screen. Here’s an excerpt from the interview below.

You’ve done a number of films that are small character pieces. What’s it like to then go do something the size of The Amazing Spider-Man 2, where things don’t get much bigger?

JONES: It’s a completely different experience. That’s why I wanted to do something like that. I’ve done a lot of very low-budget indie films, so it was just really exciting and fun to be doing a film where there’s a lot more time and these huge, vast sets. I was like a kid in a playground. It was amazing!

That must be the definition of Hollywood movie magic.

When you work on something like that for a big studio, is there a moment where they pull you aside and say, “Don’t tell anyone about the story,” or is that just inferred?

JONES: I think that that’s inferred, mostly. You want to protect the story that you’re telling, and I guess that’s the reason.

Did you have a say in your costumes for that?

JONES: Oh, yeah, totally! Absolutely! It’s a medium that’s very collaborative. Actors and directors work on things together. That’s how I like to work, anyway. I don’t want to be told what to do. I want to share it with someone and work it out together. You know that person better than anyone. That’s my job.

Sounds pretty obvious here. Is Sony overloading the Amazing Spider-Man 2 with too many characters from the Spidey universe? We can’t decide.