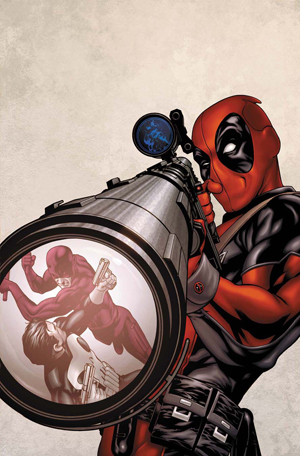 More than pleased with the results of “Predators” and “Machete,” 20th Century Fox is considering keeping Robert Rodriguez on the payroll, offering him directing duties for the planned Marvel adaptation of Deadpool.
The Playlist puts it all together:

Robert Rodriguez has been offered to direct “Deadpool” by 20th Century Fox, tipped to us by the latest issue is something he is considering, but that’s it at the moment. But perhaps more tellingly, it clearly indicates that Fox is happy with how the “Predators” and “Machete”/Troublemaker relationship is going so far and this is also indicated by the fact this is the second project in five months they have offered the Austin-based filmmaker (they also offered him the “Planet Of The Apes” reboot and he passed, but they also offered it to at least three other filmmakers too, which illustrates the randomness of an offer story — none of those directors took the gig). of Production Weekly and confirmed to us by a source very close to the project.