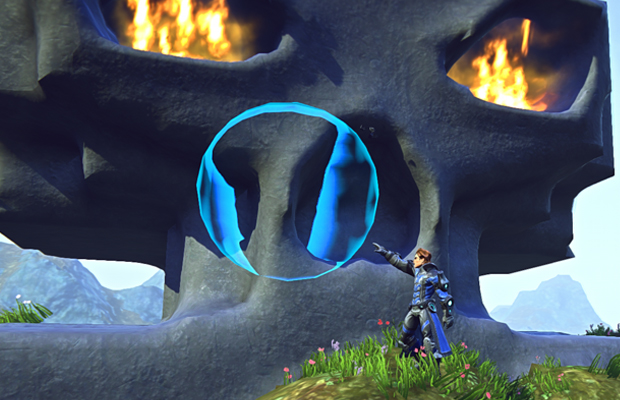 Sony Online Entertainment spent the past couple of years rebooting its popular PC franchise—creating a sandbox MMO set in the EverQuest universe. The pre-end result is EverQuest Next Landmark. Having recently launched an alpha for the Minecraft-like offshoot, Sony looks to recapture the magic of the series, while bringing new players into the fold with its DIY approach. Evolve visited the SOE Campus to talk with Lead Game Designer Darren McPherson and Senior Global Brand Manager Omeed Dariani about EverQuest Next Landmark. The duo was awesome enough to touch on the game’s new tool set, paying players, the wildest creations they’ve seen thus far, and what SOE looks forward to with the PS4 launch.

Evolve: How did the decision come about to create an EverQuest game that the player can pretty much create gameplay elements for?

McPherson: In the advent of designing EverQuest Next, we decided we really wanted players to engage in the game itself. Not just play it, but create it, and create things they would love to see. It’s a passion we’ve loved to see, as we’ve played games for and we finally wanted to hand that out to the players. So we decided to design this tool set. That’s where Landmark was born, from these ideas of getting players into the games with this tool set and that became its own game. So now EverQuest Next and Landmark will be two separate games, both using the same engine.

Evolve: Now that you’re putting the future of the franchise in the gamers hands and allowing them to expand on the universe, how does Sony plan on offering new content that comes off fresh to the player who already feels satisfied with its developments?

McPherson: One of the things is user-generated content gets us fresh content—far faster than we could produce on our own. Players have the power to make content for themselves and for each other. So one of the ways we’ll keep it fresh is by letting players create. The other way is through exploration. EverQuest Next will have multiple layers of the world. You’ll be able to dig down thousands of meters and explore and find things under there. And just when you think you’ve explored everything, we’re gonna reshuffle all of that. So it’s all new and other things to collect.

Dariani: I think a big part of it is that the world will never be the same twice. If you log out for a week and come back, people will have built different things. Items that have existed, no longer do. The entire topography of world has changed with what’s procedurally generated. The world is just designed to stay fresh.

Evolve: With the introduction of destructible environments and objects, what are some of the most insane creations you’ve witnessed or heard the development team assemble with the new creation tool?

McPherson: G-rated (laughs)? The weirdest things we’ve seen in the game include giant robots, mechs that people have constructed. We had a guy build a cube that was hollowed out made of cubes. We have grappling hooks and other heroic movements in the game. We’ve seen people build rope courses where you have to see how fast you can go through it.

Dariani: I was building ramps like an extreme sports course. People are doing all kinds of different things and I think that experimentation is really an amazing thing.

Evolve: Thought about including novelties like skateboards and other non-fantasy-like items?

McPherson: EverQuest is genre-less. It’s not Sci-Fi or Fantasy. It’s whatever we put in the game. So having those type of vehicles or mounts, it’s definitely within the scope of what we’re talking about.

Dariani: One of the words we describe for getting around is hardcore. Hardcore is a huge influence on the way we built our world. It’s very easy, lots of places to jump and climb up, the same kinds of kinetic movement that sports make so cool. We wanted to get that directly in the game, actually just moving around the world kinda feels like an extreme sport.

Evolve: Most gamers are satisfied with the creative freedom to add elements and build their own worlds in a game for free. So why pay them?

McPherson: It really engages those people who really want to create a product. You and I can get together and build a brick house. And that’s fun. But some people want to build fantastic objects. Put hours of hours into intricate design using the tools we provided them. We really want players to feel rewarded for that, to be incentivized to put forth that effort to make amazing things.

Dariani: Everyone has gotten into the game industry through their passion. A lot of people have been mod designers, created things in one way or another, but there hasn’t been a formal process where you could really surface that creativity. One of the things we really like about this, students for example trying to get in the game industry, giving them the tools to design their own stuff and be rewarded financially and in fame for it—it’s a way for people to get into the industry. It’s a way to make money and do it professionally over time. As this program grows, it’s gonna come to point where these people are going to make more money than us. Just using the player studio.

Evolve: EverQuest achieved moderate success on the PS2 when launched years back. With the PS4 proving to be such a powerful piece of gaming hardware, do you see the next-gen console being a huge market that EverQuest Next can bank from?

Dariani: EverQuest Next will be on the PS4, eventually. Obviously, other games like Planetside 2 is going into beta. DC Universe Online is already on PS4 and doing tremendously well. We definitely see it as a major market. We are just able to expose our products to a new audience who may not have a powerful PC and sort of stuff like that.