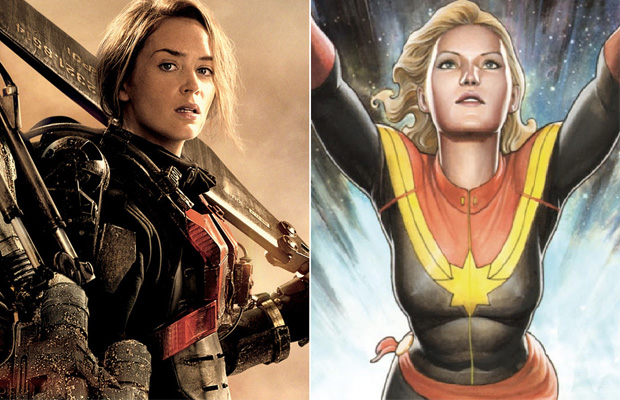 With Edge of Tomorrow and Into the Woods now behind her, it is safe to say that Emily Blunt has had a busy couple of years. However, as the rumor-mill suggests, things might get a lot busier. The Internet has been afire with speculation that Blunt, known for her glowing box-office numbers and devoted fan base, is up for the coveted Captain Marvel role, but until now there has been no word of confirmation – or denial – from the actress herself.

In an interview with Collider, Blunt quickly dismissed all the hubbub about the role being offered to her, but also stated that if it’s a “great part,” then nothing is out of the question just yet. She said:

“It’s funny ‘cause I’m hearing this Captain Marvel thing from a lot of people. I have no official offer, whatsoever. No one’s called. I don’t know where the hell it’s come from, in all honesty. For me, I just think that the part has gotta be awesome. I just want to play great parts, and it’s sometimes hard to find within those big superhero movies. The female parts are not usually great, but recently, they’ve been better. I don’t know. It has to be the right thing.”

We know D.C. is having some trouble getting their own female superhero vehicle, Wonder Woman, off the ground, so let’s hope that Marvel can cover this ground with a bit more urgency. Do you think Blunt is up for the role?