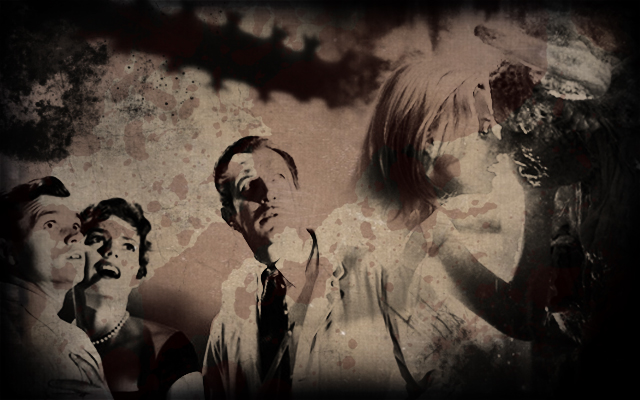 Human beings alone are the most complex and disturbing species in the universe. But when inhabited by a mind-controlling, parasitic creature, they’re far more unpredictable and dangerous. So what is it that really creeps us out about these fictional barnacles? Its take of unnoticeable shape-shifting forms? How about the zombie-like presence they place victims under? Or is it the repulsive tendency some have of shooting a slug-like creature into your mouth? Answer: All of the above. So as we search for some great horror films heading into Halloween, we revisit the classics that got under our skin in more ways than one. Here’s a look at the 9 Scariest Parasite Films of All Time. Trust no one. 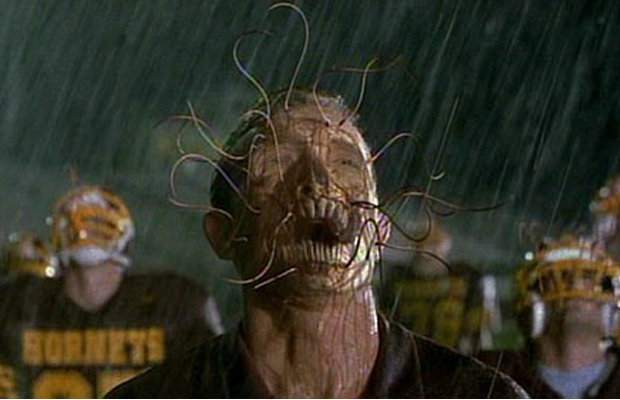 OK. You’re probably saying to yourself: “Hold up. This wasn’t scary.” Wasn’t it? Aside from Kevin Williamson’s dark comedic dialogue, The Faculty kept you second-guessing every character’s motive, offered a few jump-out-of-your seat moments, and made you terrified of Robert Patrick (Terminator 2: Judgment Day) once again. Plus Famke Janssen’s transformation from the quite pushover to the sassy, smoking-hot English teacher that psychotically goes off on super senior Josh Hartnett is every boy’s demented wet dream. The film begs to ask the question we’ve all wondered as teens: “Is my teacher some kind of alien or just a bitch?” In this case, it’s both. 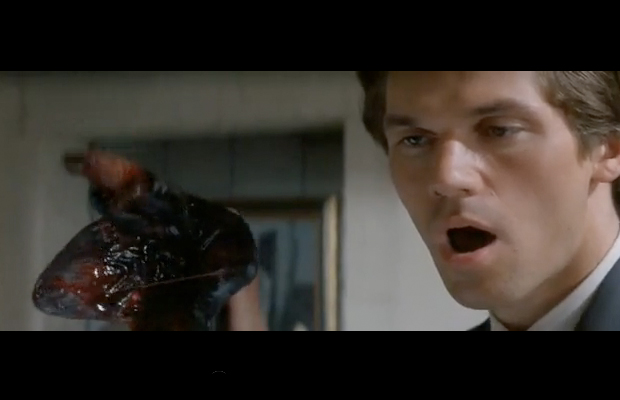 This film adaptation of the 1951 novel was overlooked by moviegoers, but favored by hardcore sci-fi fans. As the leader of a government agency, Andrew Nivens (Donald Sutherland) and his team of operatives, which include son Sam (Eric Thal), are sent to thwart the covert invasion of Earth by mind-controlling parasites in the Midwest. The life-like animatronics of the spine-attaching aliens are creepy (to say the least) and Sutherland’s performance turns out to be the complete opposite of his role in the Invasion of the Body Snatchers remake—playing a more complex and irrational character here. And no good alien-takeover flick is official without an appearance from genre-favor Keith David. 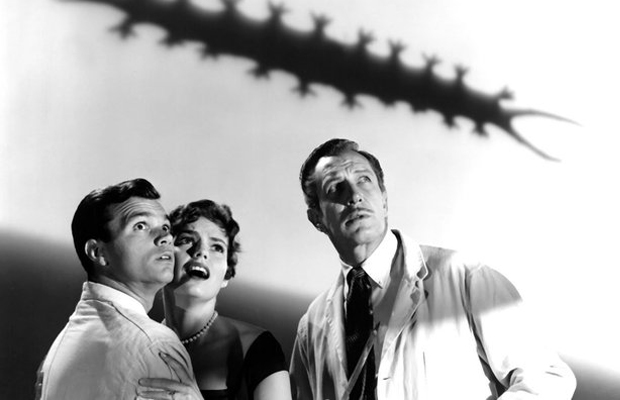 The 50’s cult classic knew exactly how to send an uncomfortable chill down your spine, by placing the idea of a fictional host that lives on the backbone, which is responsible for the nervous pinch you feel when scared, in the back of our mind. Vincent Price is in vintage form as the disturbing Dr. Warren Chapin, a pathologist who discovers the parasitic creature that grows stronger with human fear and crushes the spine. The build-up to the centipede-like organism’s escape works well, but it’s the terrifying (and ironic) climax that raises the film’s chill factor, as we find Price’s acquaintance, Oliver Higgins (Philip Coolidge), locked in the same room he scared his wife to death in, who then shockingly stands up and stares him down as the picture fades to black. They don’t make’em like they use to. 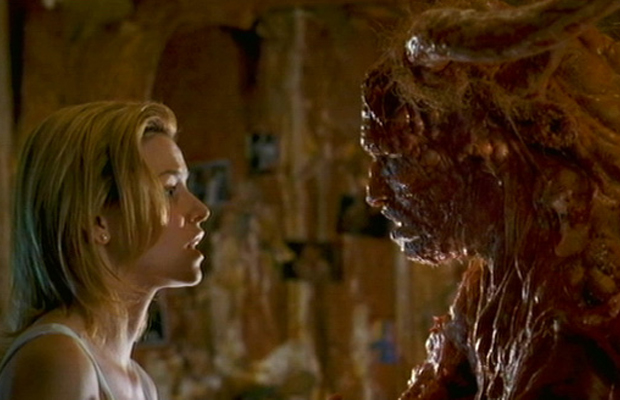 Morbidly gross and disturbing, just for the hell of it, Slither poked fun of the over-the-top gruesome explosions and zombie-like rednecks present in the 70s horror exploitation films. But it was the mass number of sluggish parasites that filled the screen and the unpredictable nature of the town’s people that had goosebumps running down your arms. Plus Michael Rooker’s grotesque makeover as the malevolent alien creature (known as the Long One), alongside some of the other shocking character mutations, kept you clutching onto an already squeamish stomach. 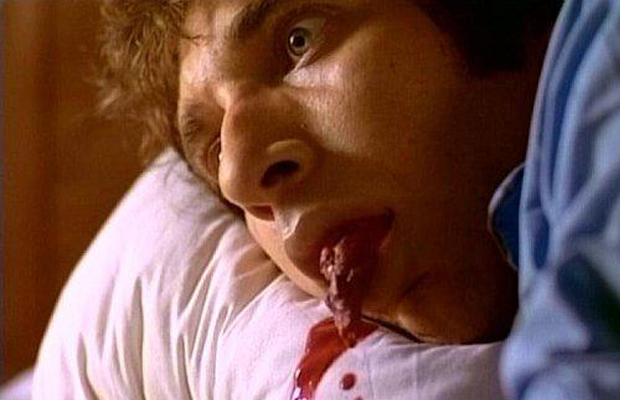 Did you know flu-like symptoms such as shivering can lead to syphilis? Director David Cronenberg did and used the idea to capitalize on the STD fears of the sexually active youth—by creating a parasitic lifeform that turns people into sex-crazed fiends out to infect the world ala sexual intercourse. That’s B-movie platinum right there. The thought alone of catching a venereal disease is frightening, but once you see the effects of those infected in the film, you’ll practically commit to a lifetime of celibacy. Now that’s scary. 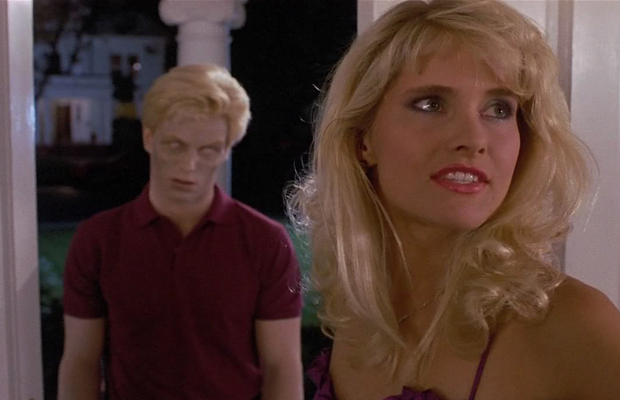 Night of the Creeps carried the standard attributes of a 80s campy horror film: bad overacting, cheesy dialogue, and Tom Atkins. However, the film’s leech-like parasites terrified you to the point where you started covering your pie hole and tucking your pants into your socks, in fear of having one crawl into your month and laying eggs in your brain. The film brought a new twist to the zombie genre by incorporating sci-fi elements, and though the main characters are emotionally underdeveloped, you gain a sense of sympathy and root for them going into the final act (yes, even born-to-play-a-dork Jason Lively). But hands down, Atkins steals the show with his horrid backstory and hilarious one-liners. And no matter which of the two endings you catch, you’ll still end up tucking yourself under the sheets paranoid over these fictional slug-like creatures frolicking around your bedside.

Fun fact: Each of the main characters last names were based off of celebrated horror and sci-fi directors. Look at the IMBD profile and see for yourself. 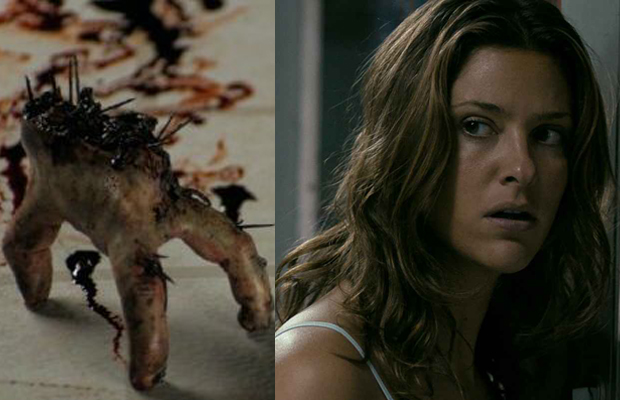 The tagline speaks for itself: “It Will Get Under Your Skin.” This independent horror film traps a couple and escaped convict duo in an abandoned gas station, where the foursome is forced to work together to fend of a foreign creature that transmits a contagious, porcupine-like fungus, which manifests in the human body. The incontrollable virus is so enhanced that even limbs get resurrected and develop a taste for blood. That’s some bugged out shizz right now. See if you can get past the gruesome arm mutilation scene without squirming. 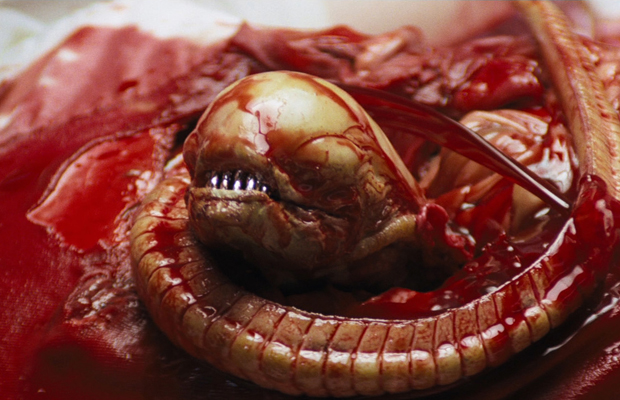 Ridley Scott’s tour de force is still up for debate as far as it being labeled a parasitic film. Lets see—a face-hugging monster that puts its victims in a coma, keeps them breathing, and lays an egg in the upper body, which then produces a chest-bursting alien—kind of speaks for itself. Even though the film’s parasitical (yea, we’re sticking to it) moments build at a gradual pace, it’s the alien’s full-grown presence and that second tongue that gives viewers nightmares till this day. The intimidation factor becomes so intense that even badasses like Yaphet Kotto, Tom Skerritt, and the lovely Sigourney Weaver sweat profusely in fear of their lives. Need we say more? 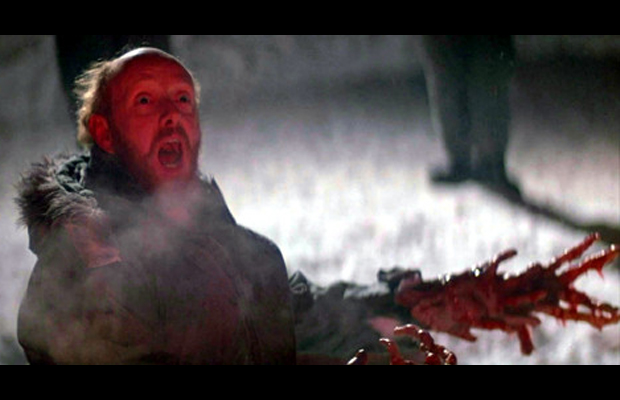 Master of Horror John Carpenter managed to do what most horror directors have failed to accomplish throughout the decades: create a masterpiece remake that outshines the original. What makes the 1982 version of The Thing amazing is that it plays out like a mystery rather than a horror film. As the shape-shifting extraterrestrial starts picking people off, as a viewer, you find yourself cracking under the same pressure as the characters and play the same guessing game as to whom, or what, the alien parasite has taken over. And the fact that story traps the entire research team in the middle of the Antarctic with little-to-no communication tools only intensifies each act. The creature mutations and interrogation scenes are guaranteed to leave you saying WTF, while the cast does a phenomenal job of demonstrating the hostility and anxiety that develops while caught in this unnerving situation, especially lead actor Kurt Russell. We can only pray the upcoming “prequel” doesn’t taint the franchise.