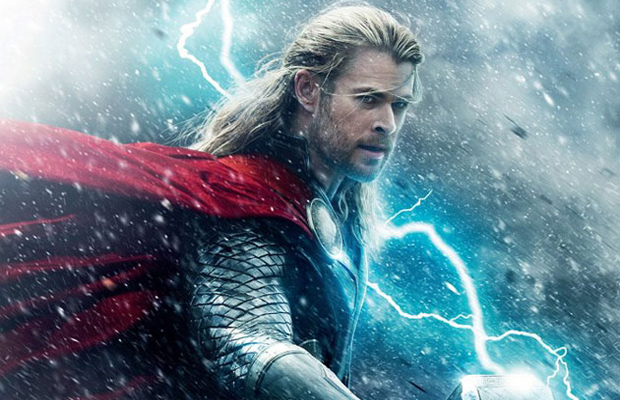 Marvel’s been going hard on the promotional front for Thor: The Dark World over the past few weeks unveiling several TV spots for the sequel. Though someone over in its publishing division might be losing their job, as a recent detailed description of the film’s junior novelization has recently leaked online via The Lair of the Obasan Tumble page—possibly unveiling the several plot points and spoilers. We warn you, read at your own risk, that is if you’re seriously holding out to catch it on the big screen. Shout out to ComicBookMovie for the reveals.

1) Siglain’s book starts with the two kids from the trailer, Maddie and Navid. They unwittingly stumble upon the Dark Energy in an industrial complex in south London. No, they are not given superpowers as the trailer made it look. In the case of the truck, it was already floating on air. Navid touched it and it flipped.

2) The next scene focuses on the dark, dead world of Svartalfheim. The Ark appears, having been floating in space. Malekith is the first to wake up and is met by Algrim. Take note that in the Movie Storybook, Algrim still looks like a Dark Elf. Inside the Ark is an amphitheatre with thousands of Dark Elves in pods lying in suspended animation.

3) In Vanaheim, you have Hogun, Fandral, Sif and Volstagg (in that order of appearance) fighting the Marauders. Thor makes his appearance (actually, it’s Mjolnir first before Thor) here, having come from battling trolls in Nornheim. As in the trailer, Thor faces the Kronan stone monster.

4) After the battle, Hogun wants to go back to Asgard with the others. But Thor tells him to stay. It will be revealed that Hogun actually has a wife and child. Before Thor and company leave though, Thor senses a dark power in Vanaheim.

5) Two Marauders encounter Malekith’s scouts (yup, it’s these guys whom Thor sensed). This is where you get to see how those blasters of theirs work. These guns create black holes which suck the target into them and then implode.

6) Back in London, Jane is on a date with a guy named Richard (Darcy got her into those online blind date thingees with the profile). Darcy herself would crash Jane’s date to “hint” her about strange readings that she got from the equipment that they’ve been using to track Thor. Although not in the book at all, Erik Selvig has been also monitoring these same anomalies. (Note that Jane hinted that Erik is still suffering from the aftereffects of Loki’s mind manipulation.). Their readings take them to that industrial complex where they encounter Maddie and Navid, and all that weirdness (I don’t want to give this away, because it’s better seen in the movie). While nosying around the place, Jane discovers a time and space rift, actually, the Dark Power. She is then “magically” pulled toward it and is consumed by the power. (Actually, the Dark Power enters Jane).

7) The Marauders are taken to the dungeons. This is where everyone gets to see Loki for the first time. BUT, more on Loki in a separate post.

8) Thor reports to Odin what happened on Vanaheim, particularly his sensing the Dark Power. Odin already guessed that Thor wants to investigate…on Earth. The Allfather made it perfectly clear early on that Thor should not have anything to do with Jane. However, while the others have a feast, Thor goes to Heimdall who tells him that Jane is studying the “Convergence” (yup that time and space rift aka Dark Power). Basically, this makes up Thor’s mind to go to Earth. (Heimdall is rather sneaky, going against the Allfather’s desire).

9) In the meantime, Malekith and Algrim survey the desolate remains of Svartalfheim while their troops get ready for the battle ahead. Those masks that they are wearing protect them from their realm’s poisonous air. Malekith reminisces about his wife and children. He swears to bring their realm back to life and restore it to its former glory. Malekith removes his mask. Algrim also does the same.

10) Back in London, Jane wakes up in the complex and goes back to Darcy and the others to tell them about a “stable gravitational anomaly”. Darcy apparently has called the police because Jane had been missing for 5 hours. The rain starts to pour and, while everyone runs for cover, Jane is right in the middle of that downpour and not getting wet. It is at this point that Thor arrives. He asks if she’s alright, and Jane slaps Thor in the face (“I just wanted to make sure you were real.”). Thor later demands where she was. It turns out that Jane was lost to Heimdall’s sight for a time. Take note that the dialogue that is in the TV spot (Jane saying something about the Avengers) is NOT in this book (the Darcy “muscley line” is in the book though). (Most likely it’s one of those new lines that have been added). Before they could be apprehended by the cops, Thor takes Jane to Asgard.

11) Meanwhile, the Dark Elves are getting ready to attack Asgard. But Malekith whispers something to Algrim about “a top secret plan that only he can accomplish”. One can only assume that this plan refers to his transformation into Kurse.

12) In Asgard, Thor brings Jane straight to Eir, the Goddess of Healing, who uses the Soul Forge (much like Asgard’s version of an X-ray) to examine her. However, it is a furious Odin who comes and immediately demands that Jane be returned to Earth. There are two variations. In the Movie Storybook, it is Odin who discovers the Dark Power inside Jane using Gungnir. In the novel, it is Eir who points the anomaly out to Odin using the Soul Forge. I can only presume that the movie will be a combination of both. In any case, despite his reluctance, Odin agrees to let Jane stay, since Asgard is the safest place for her to be in.

13) Odin takes Thor and Jane to the Hall of Science (Jane’s curiosity about Yggdrasil gets her in a comical situation. Yes, the movie will show the World Tree) going to the palace library. Reading through the book, Odin starts with “Some believe that before the universe, there was nothing. There are wrong.” It turns out that during the period of darkness, the Dark Elves ruled over the universe. But with the birth of the Light, the Nine Realms were also revealed (Jane insists that this was the Big Bang Theory). Naturally, the Dark Elves, under the rule of Malekith, resisted the light, Malekith created a weapon out of darkness to wage war against the Nine Realms. He was, however, defeated by Odin’s father Bor. Although Bor offered Malekith a truce, Malekith said that he “would not live in a universe he could not rule.” After this, there are some sweet moments between Thor and Jane, and Jane gets to meet Frigga.

14) It is then that the prison break occurs. Contrary to what most people believe, it is not Loki who instigated the prison break. It is Kurse who breaks everyone out with a little helpful advice from Loki. As Thor and the others try to prevent the prisoners from escaping, Jane is left behind with Frigga.

15) Heimdall discovers what happens and grabs his sword to help. But he is distracted by…

16) As the battle ensues, Malekith goes to Frigga’s chamber to get Jane. As everyone knows by now, Frigga fights Malekith, but gets disarmed by Kurse. Unless TPTB at Marvel did not change this, Frigga did not die. Odin arrives with some Einherjar, but Kurse and Malekith threatened to kill her if he would not surrender Jane and the Dark Power to them. The actual line of Malekith is “You will face the same choice I did. What will it be Asgardian? Your wife or your world?”

17) At this point, Thor arrives to save the day. He fires a lightning bolt at Malekith but he is protected by Kurse. The lightning ricochets and hits the right side of Malekith’s face, scarring him. They escape by jumping from the balcony and into a Harrow.

18) Both books end with funerals for the slain Asgardians.

Is it still work watching heading out to watch the movie?