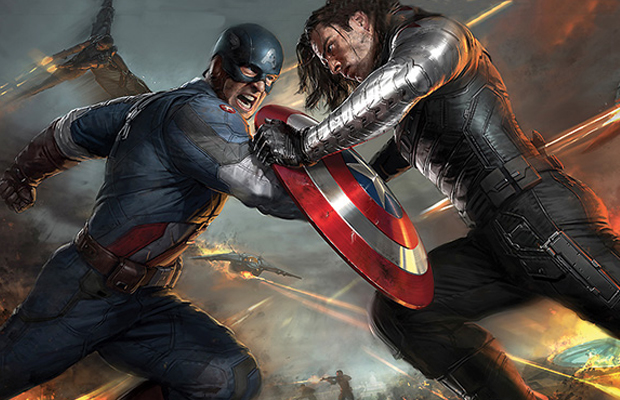 During a screening for the latest Marvel One Shot: All Hail the King, Marvel Studios capo Kevin Feige blessed viewers with a look at the first 10 minutes of Captian America: The Winter Solider. Slash Film’s Germain Lussier went on to provide a description of what he saw in regards to the upcoming sequel, which you can read below.

Fade up on a beautiful Washington D.C. morning. A man named Sam Wilson (Anthony Mackie) is running around the National Mall when another man flies by him at five times his speed. “On your left,” Steve Rogers (Chris Evans) says not one, not twice, but three times as he continues to lap Wilson. When they finish their runs, Wilson jokes about how fast Rogers was running and they introduce themselves. Wilson knows who Rogers is and relates to him a bit because he’s also a solider. The two chat about the changes in society and Wilson recommends “Marvin Gaye, 1972, Trouble Man.” He says it’s everything you’ve missed, all on one album. Rogers pulls out a notebook and says, “I’ll add it to the list.” We then cut to this “list.” “Steve Jobs,” “Star Wars/Trek,” and about 12 other things are on there. I’d report more of them but I was laughing too hard. Rogers has watched Star Wars though, that half of the entry was crossed off.

Rogers gets an alert on his watch that it’s time to work. He says it was nice to meet Sam and Sam tells him if he’d ever like to stop by Sam’s job to impress the receptionist, that would be great. He laughs as a black Corvette pulls up. Inside, Natasha Romanoff, who rolls down the window and asks the guys if they know where the Smithsonian is. “I’m looking for a fossil.” Wilson smiles, flirts for a second, Rogers says, you can’t run everywhere. The Vette speeds away

Cut to the Indian Ocean where a helicopter is flying out to sea. On it, Brock Rumlow briefs the now fully suited up Captain America and Black Widow that a terrorist named Georges Batroc (Georges St. Pierre) has taken a cargo vessel hostage for $1.5 billion. Why so much? This is a secret S.H.I.E.L.D. ship and Cap says he’s tired of being Nick Fury’s clean up crew. They get all the details (which includes Cap very curious why S.H.I.E.L.D Agent Sitwell is on this ship) and Widow asks Cap if he did anything Saturday night. He says “No,” because the members of his barber shop quartet are dead. She tells him if he asked out a certain girl at work, she’d probably say “Yes,” and Cap says that’s why he doesn’t ask. He’s “too busy,” he says and jumps off the plane. “Was he wearing a parachute?” asks one soldier. “No,” answers Rumlow. “He wasn’t”

It’s also been said the film will run at 2 hours and 16 minutes–making it the second longest Marvel film ever. You can read the full description over at Slash Flim. Captain America: The Winter Soldier hits theaters on April 4th.

Related: It’s Official: ‘Guardians of the Galaxy’ Trailer Premiere
Related: Is Marvel Considering A Black Widow Film After ‘The Avengers 2’?