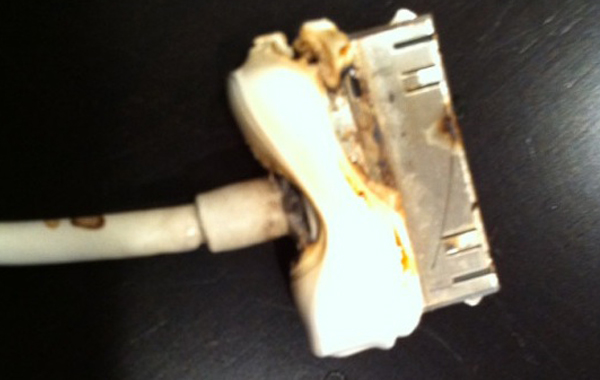 It’s a gift and a curse being an early adopter in the Beta software phase. Just ask iOS developer, Gus Pinto, who’s was nearly burned while testing the Apple’s upcoming mobile operating system: iOS 5. Pinto tweeted his encounter with a flaming cable that caught fire while he was charging is iPhone 4: “My charging cable caught on fire while charging my iPhone 4 running iOS5. #fail.” No kidding.

Fortunately for him, the fire didn’t spread much beyond the cable, as he put it out after noticing small flames. We’ve heard many, many reports of the iOS 5 Beta causing the iPhone 4 to run considerably hotter. Apple’s on the case though and will surely refine its software, as it always does.