Andy Serkis Confirms He Has Just One Role in ‘Star Wars: The Force Awakens’ 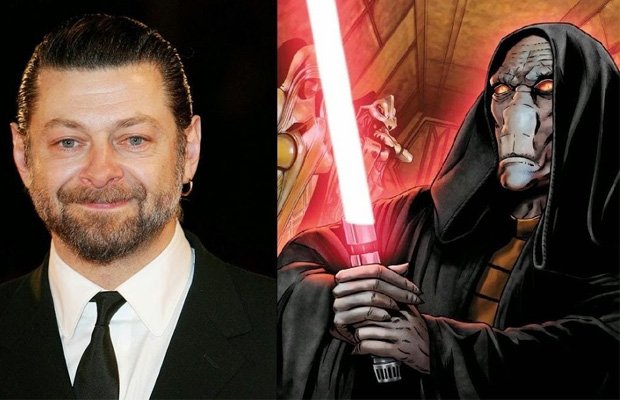 Once word broke out that Andy Serkis was cast for the upcoming Star Wars sequel, many speculated the motion-capture actor was going to take on dual roles. The Dawn of the Planet of the Apes star has killed those rumors confirming he will only take on one character in The Force Awakens: “No that’s not true at all. I can say I only play one character.” When asked whether the role was a CG or live-action one, he stated the following:

“I can’t say a single thing about that. I’m sorry. These things will all come out in the fullness of time, I promise.” He does add that: “The character …ye’s been through some stuff.”

Serkis also confirmed his voiceover work in the trailer was his actual voice and not altered:

“That is the character. There’s no digital manipulation. That’s just me”. He also says he had no idea his voice would play such a prominent part in the clip: “Director J.J. Abrams and Lucasfilm president Kathleen Kennedy told me, ‘You’re all over the trailer,’ but I didn’t know what that meant. I thought, ‘Oh great, they’re using the voice of the character I play for the trailer. That’s fantastic.’ Not thinking what that would actually translate into.”

No other word on what is actual role will be in the film, but expect some update heading into Spring 2015. In the meantime, Serkis is off directing the motion-capture film adaptation of the Jungle Book.