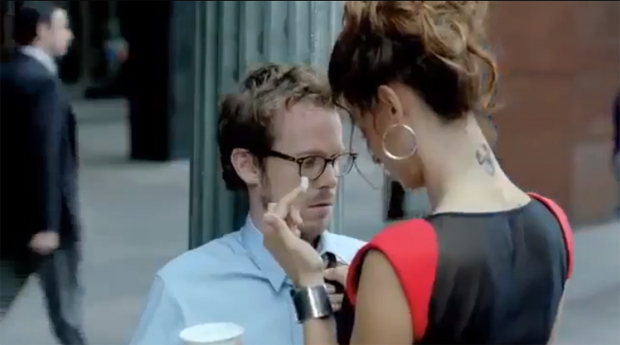 Everyone tuned in to watch the New York Giants repeat history and beat the New England Patriots in Super Bowl XLVI. As we planted ourselves on the couch and kept all eyes glued to the 50-inch flat-screen, the NFL began rolling out its numerous game breaks, forcing us to sit through this year’s Super Bowl ads. Strong outings from the auto and tech industry’s most popular brands offered entertainment and comic relief, while others failed miserably by banking on A-list talent and sticking to last year’s script (spoiler: talking babies). So as we celebrate Big Blue’s win, let’s revisit the Best And Worst Super Bowl XLVI Commercials.

One hashtag says it all: #SoLongVampires.

It’s good to see the crabby red M&M come out of its shell and have a Stu moment. We’re talking Hangover, people.

Chevy “End of the World” Commercial

GM proves the Mayan Apocalypse is no match for the new 2012 Chevy Silverado. Ford: Shots Fired.

The mobile giant continues its ribbing session on the Cupertino clan and its hardcore consumers with the introduction of the smartphone-tablet hybrid: the Galaxy Note. Looks like the next big thing is already here. “Freeedom!”

Anheuser-Busch reminds us how grateful we are for alcohol and football. Bottoms up!

Drew Brees baby boy is going to be one hell of a kicker. Chase knows exactly how to promote its new smartphone app-based payment system.

Go Daddy finally put together a sexy, not-so-risque commercial that actually placed some focus on its latest online service rather than wardrobe malfunctions. The cloud, beautiful women…”is this heaven?”

The hottest and most talked about Super Bowl commercial goes to FIAT, baiting every male football fan with a sultry latin siren and its stylish mini coupe. “You’ll never forget the first time you see one.”

Jerry Seinfeld + Jay Leno flying away in Green Goblin fashion = Epic Fail. The Soup Nazi couldn’t save this one.

Mind you, H&M is known for its “fashion-forward” and affordable clothing selection. So for its million-dollar spot, the company hired soccer staple David Beckham to strike a pose in his underwear…that’s it. Talk about an easy payday.

Someone inform E*Trade that talking babies is so 2009. Besides, running the same ad three years straight gets played out pretty quick. Wouldn’t you agree?

If having LMFAO butcher the 12 Days of Christmas for the NBA wasn’t Budweiser at its worst, then this shameless halftime promo for the pop group clearly taps the keg.

Don’t think anyone’s willing to spend five or six figures on a beamer just for a heated steering wheel. Pass the memo to BWM.