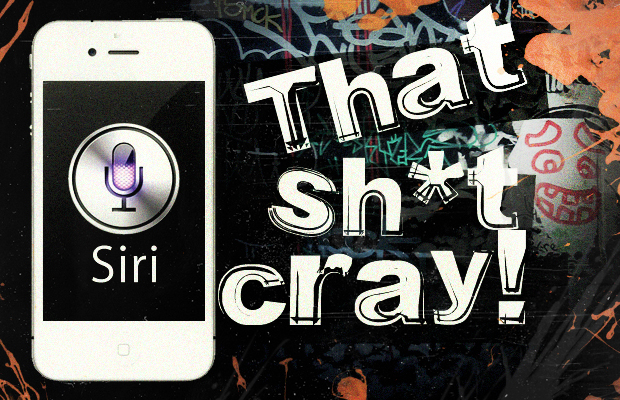 Apple’s voice-recognition software has practically been exploited for every situation imaginable, from advising horn dogs where to score Viagra to dishing out the fiercest snapbacks when asked why it’s “such a bitch.” Just goes to show you what most iPhone 4S-Stans really use the mobile virtual assistant for: entertainment purposes. In fact, here’s a couple of winners who had nothing else better to do than to record their next-gen handset reciting the lyrics to some of our favorite hip-hop joints—word for word. Watch Apple’s baby get busy on the mic as you check out the 10 Hip-Hop Songs We Know Siri Can Rap.

Though Siri rhymes with zero animation, she puts her own twist on the Harajuku Barbi’s massive 2011 single. Rapping at full speed, much like the pink-wigged rapper, she handles the track with ease.

Peep the pimped out toy caddy on hydraulics, as the iPhone 4S goes straight west coast on us with a classic from the D.R.E.

With proper pronunciation, and explicit lyrics intact, Siri goes AWOL on one of the hardest diss records of all time. Tupac back, in Siri form!

Your eardrums will love this! No yelling from Waka, just Siri going hard on the track.

Siri gets faded as she raps about money, fame, and what else, n*ggas in Paris. Acapella that is. Watch her recite Jigga man’s opening verse. That sh*t cray!

What better record to practice its rhyme skills than on the Academy Award-winning theme track from Eminem’s 8-Mile? Fit to tune, Siri’s male voice chants the first verse seamlessly.

Apple’s personal assistant spitting “I’m not a star, somebody lied,” and “Cause if I died today, remember me like John Lennon” sounds pretty hilarious. Nonetheless, these two lines sum up Apple’s next-gen smartphone.

Despite the awkward intro, Siri gives Drizzy his due. Overdosed on confidence fo’ sho’.

Uh, Uh! Rapping in-sync over The Hitmen’s infectious 90s production, while keeping up with Biggie’s flow, the voice program might just put some of these rappers out of a job. Siri Smalls is the illest!

After this song dropped, everyone from Justin Bieber to tweens across the globe tried to master Busta’s verse. Here’s Siri’s noteworthy shot at it.