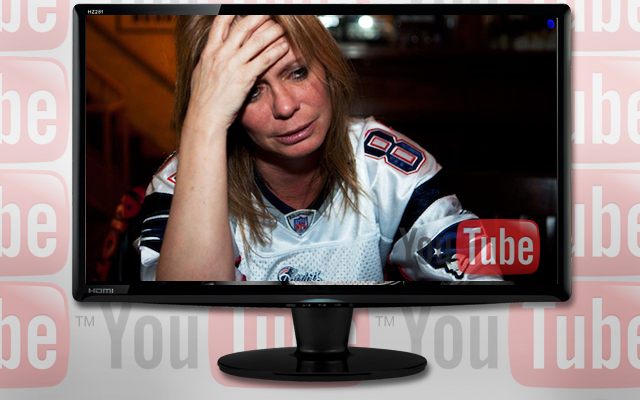 Some sports fans can’t take losing the big game. Case in point: New England Patriots fans. As history repeated itself and the New York Giants walked away with the Lombardi Trophy, Tom Brady and company pulled another choke job and brought out the sore loser in every diehard Pats fans. In fact, some people voiced their frustrations and shed more than enough tears on camera, becoming YouTube laughing stocks and online amusement for the rest of us. So as Big Blue celebrates their Ticker Tape Parade today in New York City, we invite everyone for some comic relief by watching these 10 Hilarious Videos of Patriots Fans Crying Over Super Bowl XLVI Loss.

Brady’s most obsessed fan believes she jinxed the Patriots chances, talks killing Giants fans, and cries a river as her closest buds find humor in her Super Bowl pain. That’s what friends are for, huh?

Who new the Aussies took their football so serious? Meet Steve. Steve’s had one too many and weeps over the Patriots loss, as well as dropping $9,000 on attending the Pro Bowl. We can’t tell which is more comical.

The last minute of Super Bowl XLVI was to much for this Patriots loon to bear. So she checked out early via emotional breakdown. But wait, there’s a post-game show. You can watch the second half of her meltdown here.

Nice way to break it to a 5-year old fan. Good job dad. No, really!

“We were suppose to win…”

Super trashed or suffering from multiple personality disorder? Watch Drunky McGee go through her emotions as she freaks out over the team’s loss and spazzes on New England fans.

“I hate the NY Giants. I can’t even look at the symbol.” Where’s the sportsmanship kid? Hear his reaction when mom asks if he’s proud of the Patriots run this year. No loyalty.

“Why Are You Crying Honey?”

You gotta love a boyfriend who puts his main squeeze on the spot, on camera mind you. Watch this Patriots cutie shed a few for her fallen soliders, while her confidant continues to egg her one.

Aside from experiencing a huge meltdown after the last play, Ryan adds more insult to injury by donning a Chad Ochocinco jersey. Nuff Said!

“Blame it on Manning”

“It’s all stupid Eli Manning’s fault because he was like…just…not…stupid. He’s so stupid.” Maybe some alphabet soup will cheer her up because after all…you…can’t…spell…elite…without…ELI.

And we thought Red Sox fans were a trip. Here’s another case of let’s blame the boyfriend for making me wear the wrong sweater, therefore causing the team to lose. Cuckoo.